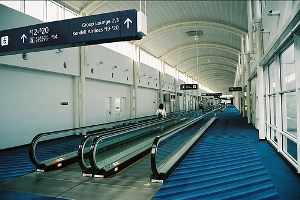 Sydney links Australia to all the other continents, hence Sydney’s airport is the most crowded and used airport in the country. Once in Australia, travelers can choose between domestic flights, trains or buses to go to other cities. Due to the long distances, the most recommended means of transport is the plane as it helps to cut down on travel times immensely. Within the cities, travelers can choose between taking public transport, walking, biking or renting a car to get around.

Sydney Kingsford Smith International Airport is Australia’s largest airport and is located at 8 km / 5 miles from the city center. There are 35 airlines which serve the airport, connecting Sydney to destinations all over the world. Sydney airport is the only Australian airport which provides connections to every continent.

Every Australian capital city is connected by plane to Sydney. Melbourne and Brisbane are located at about an hour and a half flight time from Sydney, while Canberra is at about 45 minutes.

Melbourne International Airport is located in Tullamarine, at 22 km / 13.7 miles from the city center. It links Melbourne to many international destinations in Europe, America, Asia and the South Pacific region. It’s also important for domestic flights, although Melbourne’s Avalon Airport is used for domestic flights and flights from New Zealand only.

Being the large country that it is, you will most likely partake in various types of transportation in order to get around Australia. You may need to plan how you will get from the airport to your Australia hotel, from your hotel to the attractions and from one city to another.

From the Airport to the City Center

In Sydney, a train service – known as Airport Link – links the airport to the city. The single ticket from the international terminal to a city stop costs AUD 15.80 for adults and AUD 10.40 for children. A taxi ride to the city center costs about AUD 30. You can also rent a car directly from the airport, although it would cost more than if you wait to rent when you arrive in the city. Read more in getting from Sydney Airport to Sydney.

In Melbourne, the taxi ride from the airport to the city center costs about AUD 40-45 and takes about 25 minutes. A private Skybus shuttle runs between the airport and the city center. The ride takes 20 minutes and is the fastest way to get to the city. Tickets (one-way) cost AUD 16 for adults and AUD 6 for children.

In Brisbane, Airtrain is the train service that connects Brisbane city to the airport. Tickets for adults run at AUD 15 one way, and you can save money by booking online. A taxi to the city would normally run around AUD 35 for a 20 minute ride.

From One City to Another

Driving in Australia
You can drive from Sydney to Melbourne or Sydney to Brisbane in a full day. The ride takes about 9 hours non-stop to Melbourne and 11 hours to Brisbane, but plan for breaks along the way. Your options for completing the drive are to either rent a car or a campervan to make the journey.

Bus Travel in Australia
Coach companies link Sydney to all the capital cities in Australia, but the ride can take days depending on your destination. However, there are a number of backpacker and tour bus companies to choose from in order to have an amazing trip full of sightseeing and friends along the way.

Train Travel in Australia
If you prefer the train, head to Sydney’s Central Station. Sydney is well connected to Brisbane, Melbourne, Canberra, Perth, Adelaide and other important cities in the region. Please note that because the journeys are very long, the tickets are also very expensive. Most train rides from Melbourne to the other capital cities take about 10 hours. Melbourne is also well connected to the major cities in the Victoria area (such as Albury).

Flying in Australia
To cut down on those long travel times, flights within Australia are the travel method of choice. Even with the transport to and from the airport and check-in times when there, flights can save hours or days. Budget airlines also service the country quite well.

Cruising Australia
By cruising Australia, you can see a lot or a little bit of the country, all while enjoying the spacious luxury of being on-board a ship. Cruises run from day-trips to month-long excursions, and they vary in price depending on class of service.

Walking and Cycling in the Cities

Not all Australian cities are perfect for walking, but Melbourne is one of those which are very easy to navigate, providing excellent conditions for those who prefer to “go green”. Purchase a map from one of the bookstores and start exploring the city.

As for biking, Melbourne has an extensive network of bike trails. For the tourists, the most important trails are:

Another suitable city for bikers is Canberra with its great network of trails. Please note that some tracks away from the city center might be quite hard to negotiate (they are quite hilly). The bike tracks are also available online.

In Sydney, the only bus connecting the airport to the city is 400. Take it to the Rockdale Train Station and then take the train to the city. This is the cheapest way to arrive in the city center (the bus ticket costs about AUD 3 for tourists and the train little over AUD 3). Read more in getting from Sydney to Sydney Airport.

Sydney has a great public transport system, especially in the center and where the major attractions are located. Check the timetables, buy travel cards –they are the cheapest way to use the public transport – and a map. If you plan to stick around for a longer period of time, purchase a SydneyPass which allows for unlimited travel for up to 8 days.

Melbourne has a great public transport system, making it unnecessary to rent a car. Known as Metlink, it comprises trams, trains and buses. The trams service the city center and the inner suburbs, the trains service the suburbs, while the buses are used where there are no tram or train rails. Get a map and learn bit about the Zones (which you will get used to very easily). Unfortunately you can’t purchase discounted cards.