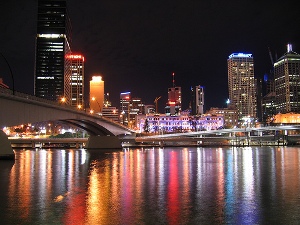 Australia’s third largest city, Brisbane is not particularly a tourist city. Because it’s located between the more popular Queensland destinations –Gold Coast, Sunshine Coast and Great Barrier Reef – the city tends to lose its appeal for the travelers. However, it does have some nice attractions: old buildings, parks, botanic gardens, a cultural central and a very relaxed lifestyle. And if that’s not enough, how about experiencing some of the world’s most beautiful sunsets?

Brisbane, Queensland’s capital and Australia’s third largest city, is located by the Pacific Ocean on Brisbane River, at 793 km /493 miles from Sydney and 1425 km / 885 miles from Melbourne.

How to get to Brisbane

Both international and domestic flights arrive on Brisbane Airport. Daily flights are available to most Asian, USA and New Zealand destinations. You don’t have come via Sydney or Melbourne but most flights would take that route because it’s cheaper.

By train, Brisbane is linked to Sydney and to most towns in Queensland.

If you choose to travel by car, Brisbane is linked to the surrounding areas by a network of highways.

Buses link Brisbane to Melbourne and to a lot of other towns in the Queensland area.

Portside Wharf is the recently opened international cruise terminal which offers a lot of possibilities for cruises, as well as a favorite location for yacht lovers.

>> Learn more about getting around Brisbane

Why not rent a car or a campervan to get to Brisbane? If you don’t have the time, plenty of cheap flights in Australia are available.

Brisbane has a humid subtropical climate. The summers are hot and humid, while the winters are dry and mild. From late spring until autumn thunderstorms are quite common, sometimes accompanied by hail stones, terrible winds and torrential rain. The average temperature is 78 F during summer and 60 F during winter, but temperatures as high as 100 F have been recording during January (the hottest month).

If you like nature, you will love Brisbane. The parklands located in the South Bank area can take much of your day. Plan to take long walks in South Bank Parklands and then go to Victoria Bridge. You might want to take a ferry ride and enjoy the scenery. Close by you will also find Queensland Performing Arts Center.

While visiting South Bank Parklands you might be amazed to find a man-made beach. But there is nothing artificial about it. The sand is real and so are the palm tries, fishes and the lifeguards.

Roma Street Parkland is the largest subtropical garden in a city, covering an area of 16 hectares / 39.5 acres. There are themed gardens, waterways, recreational areas and an open-air amphitheatre. Tourists can take a ride-on train ride to explore the vast parkland.

The City Botanic Gardens are famous for its special collection of figs, bamboo, palms and cycads. It’s one of the oldest gardens in the city, being home to rare and unusual species. The gardens are also popular among office workers who prefer to come and enjoy their lunch on the grass.

Brisbane Botanic Garden is located just outside the city. One of the most popular attractions is the Japanese Garden. The theme of the garden is reflected in the water feature. The most interesting part of the garden, however, is the stones which form the mountain and the waterfall, suggesting “endurance and the eternal passing of time”.

You should visit the Old Windmill, Brisbane’s oldest surviving building, built originally as a corn mill.

If you feel lucky, visit the Treasury Casino and if you itch for some shopping, take your time and explore Queen Street Mall.

Dance the night away or relax in one of the city’s nightclubs. If you like chillout or electronic music, try Jorge, located in the city center, while if you want to listen to live music, go to Tongue & Groove (located in West End).

Plan a Trip to Brisbane