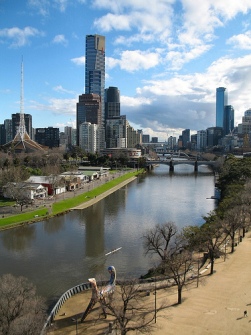 Known for the Victorian and contemporary architecture, parks and gardens, tram network and multicultural society, Melbourne is a popular travel destination for tourists around the world.

Located in the south-east part of Australia, Melbourne is often referred to as Australia’s “sporting and cultural capital”. Melbourne, built around Port Phillip Bay, is Victoria’s state capital.

>> See day trip options from Melbourne to discover what’s nearby

How to get to Melbourne

Trains link Melbourne to all the major cities in the country. Most rides take about 10 hours. CountryLink operates daily (twice) between Melbourne and Sydney, offering an alternative to driving.

If you travel by car from Sydney you should take Hume Highway. The drive is about 9-10 hours. Adelaide is closer, the drive taking only 7 hours.

Buses link Melbourne to all the major Victorian towns.

Melbourne is blessed with a moderate oceanic climate and is well known for the changeable weather conditions. Therefore a very popular local phrase is “four seasons in one day”.

During winter, Melbourne is colder than most of the other Australian cities. The average temperature in July, the cold month of the year, is 43-56 F. Snowfalls are quite rare but they do occur. However, fog and frosts are common in winter.

During summer, the weather is hot and dry. The average temperature in January, the hottest month of the year, is 58-78 F but maximum temperatures can reach 104 F.

Opened in 1853, Melbourne Cricket Ground is now home to cricket cups, concerts, the national sports museum and a souvenir shop. There are guided tours on all non-event days. The atmosphere is electric and any cricket fan should watch at least a game here.

Yarra River offers some of the most spectacular views of the city. It flows past numerous parks and gardens, including the Royal Botanic Gardens. The banks of the river are perfect locations for cycling and jogging tracks. Yarra River is also very popular among rowers and boaters. The numerous picnic spots make Yarra River a nice destination for families as well. Because of its popularity and numerous activities which can be enjoyed here, Yarra River has been compared to New York’s Central Park.

Opened since 1912, Luna Park can’t be compared to any other amusement parks in the world. It’s old character, the beautiful views and the historic carousel still appeal to the children who enter curiously through the clown’s wide opened mouth.

Plan a Trip to Melbourne