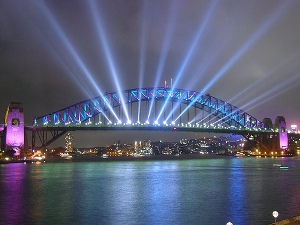 The oldest Australian city, Sydney is Australia’s capital in everything but the name. The Sydney Opera House and Harbour Bridge are two of the landmarks recognized by everyone in the world. The vibrant nightlife, excellent restaurants, great shopping and incredible sightseeing make Sydney one of the most popular travel destinations in the world.

How to Get to Sydney

All international flights arrive on Sydney Kingsford Smith International Airport. Generally, travelers from Europe and Middle East tend to come to Sydney via Asia, while those from South America fly via North America or New Zealand.

By car, Sydney is located at about 9 hours from Melbourne and 11 hours from Brisbane. The roads are high-quality, but the Brisbane drive has some narrow sections. Buses link Sydney to all the capital cities in Australia. Trains also link Sydney to the major cities in the country. CountryLink links Sydney to Brisbane daily, while the Indian Pacific links Perth to Sydney.

Rainfall is evenly divided between summer and winter and snow is not common at all (last recorded snow fall was in 1830). El Nino plays an important role in the weather patterns. Bushfires have occurred in the city’s areas bordering the wild and are quite common during spring and summer. El Nino is also responsible for the severe hail and wind storms which affect the city.

Sydney Icons
Sydney’s is most famous among tourists for its twin landmarks: Opera House and Harbour Bridge, although the Sydney Tower is another worthwhile attraction that combines minor thrills with excellent views of the city. Sydney Opera House is one of the most recognizable images of the modern world. Viewed from the air or a ferry, the Sydney’s skyline represents an unforgettable image. Each year, about 3000 events are held here, while as many as 200,000 travelers tour the building.

Sydney Harbour Bridge represents the main crossing point between Sydney Central Business District and the North Shore. Each New Year’s, the Harbor Bridge is home to fantastic fireworks displays. For the adventure traveler, there is the possibility to climb the southern half of the bridge. You can also use the pedestrian way, a lovely place for picture taking.

Wildlife Parks
The iconic Aussie animals are undoubtedly the koalas and kangaroos. For the foreign travelers, the vacation in Sydney is not complete unless they see those cute animals in their natural environment. The Featherdale Wildlife Park is home for 320 Australian species including koalas, kangaroos, birds and reptiles. You can cuddle the koalas or hand feed the kangaroos, emus and wallabies. Located just across Sydney Harbor, Taronga Zoo is home to 2,000 animals living in a lush forest. There are animal shows on display daily and you can even take photos with koalas.

Museums
There are a lot of museums in Sydney that capture the traveler’s attention. There’s free entrance to Australian National Maritime Museum, Art Gallery of New South Wales and The Museum of Contemporary Art. Also, if you want to visit the Yiribana Gallery located within the Art Gallery of New South Wales and experience the Aboriginal and islander art, you can do that for free on Tuesdays and Saturdays from 11 AM.

Beaches
One of the best things in Sydney is that you are never more than half an hour away from the nearest beach – except if you stay in the far western suburbs. Starting from the Royal National Park in the south and going north to the Hawkesbury River, the shoreline is filled with popular beaches facing the Pacific Ocean, of which the most popular is the famous Bondi Beach.

Most of Sydney’s cheaper hostels and budget hotels are in the famous Kings Cross area, which is close to the Central Business District, although it’s a world of its own. Sydney hostels are a dime a dozen to appease the high number of backpackers and working holiday makers that enter this city. However, when it comes to luxury hotels, Sydney also doesn’t disappoint. With its high numbers of business travelers, high-end restaurants and shops, the four and five star accommodation options naturally follow.

>> Book a place in one of these luxury hotels with Opera House views. Otherwise, have a browse of the Sydney hostels and Sydney hotels pages for more accommodation choices.

Plan a Trip to Sydney