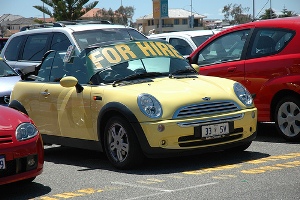 Driving in Australia is probably the best way to explore the country and enjoy open spaces. Renting a car allows you to have the freedom of driving wherever you want whenever you want, without having to stick to strict schedules. To drive in Australia, you should be at least 18 years old and have a driver’s license in English. Otherwise, you will need to investigate other modes of transportation in Australia.

Although it tends to get quite expensive for a long period of time, renting a car is a good option if you want to explore a particular region or want the freedom of creating your own schedule. The insurance is in included in the price. Remember that it’s quite impossible to rent a car without a credit card.

If you choose to rent when you arrive, remember that the prices tend to be higher at the airport. Hence it’s a better idea to take the public transportation to the city and then rent a car. Pay attention that most companies might add an age surcharge, depending on the vehicle.

Some of the car rental companies in Australia include: Avis, Hertz and Thrifty.

The Australians’ driving habits are not dangerous at all compared to some countries. Everyone (mostly) adheres to the rules. Some of the roads are very long and boring so make sure to make plenty of stops, drink a lot of coffee and share the driving without someone else. The roads are generally well-maintained, but traffic is restricted around the major cities.

Remember that traffic drives on the left! So if you come from a country where you drive on the right-hand side of the road, it will take you some time to adjust to the new situation.

A car will take you pretty much anywhere in Australia, but you will need a 4-wheel-drive for beaches and for exploring the outback. However, even though a route might seem pretty clear-cut, it is best to consult a map in advance. There may be a small section that is 4WD only, which can be a big surprise when not expecting it.

Some important road signs and their meaning:

If you are driving slowly, use the leftmost lane if there is more than one lane in the direction you are going. On a highway, use the left lane unless you are overtaking. Don’t use the horn unless you are in extreme and immediate danger. Seat belts must be worn by driver and passengers all the time. You can park where there are parking meters and have the coins to feed the machines (AUD 1 or 2). The traffic in a roundabout flows in the clockwise direction.

Read more about driving in Australia and sealed vs. unsealed roads.