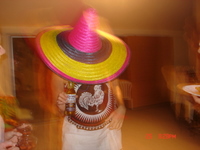 If you are in Sydney and enjoy foreign films, or you know someone that does, I recommend you go to the “Hola Mexico Film Festival“. The Festival starts on the 21st November and will play at the Chauvel Cinema.

The Chauvel Cinema is a newly Re-opened Art House theater specializing in films that are not played elsewhere in main stream theaters. They put on film festivals like the “Hola Mexico” effort. They also have a cafe’, bar, and wireless film lounge. The Cafe’/bar offers views over Sydney’s fashionable Paddington. Enjoy their premium coffee or choose from a great variety of food and drink. They also stock a range of boutique snacks.

This place has tons of history– an interesting destination in itself- but super cool due to the film offerings.

City/Central
Bus #378 from Central (Railway Square) or #380 from Circular Quay or Elizabeth Street stop directly opposite the cinema. Alight at Paddington Town Hall.

Eastern Suburbs
Bus #380 from Bondi Beach and Bondi Jcn stops outside the cinema.

Innerwest
Bus # 352 from Marrickville & Newtown travels to the cinema direct via Sydney University.