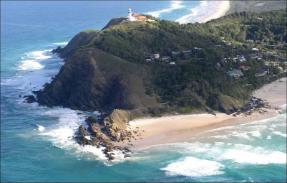 Byron Bay has for years been one of the destinations in Australia to spend New Year’s Eve. As an alternative to the more grown-up celebration that takes place in Sydney, it is the spot for “young people” to ring in the new year. So, at 28 I decided to spend New Year’s Eve in Byron Bay. It turns out that Byron Bay isn’t quite the celebration it was in years past. Drinking outside of the clubs and bars is strictly prohibited. As a matter of fact, the liquor stores were closed on New Year’s Eve. Apparently, the powers that be on the Hippie Coast had enough of the rampant drug problems and fighting and cracked down on the celebration. But if you’re determined to go, you’ll still find a lot to do in Byron Bay on New Year’s Eve.

First of all, the term “young people” is definitely subjective. I felt like anyone under the age of 30 most definitely fit in to that category. It turns out I was wrong. My friend and I, both the ripe old age of 28, ended up feeling like the old guy at the skating rink. The most aged people we met besides ourselves were about 22. If you’re a 17 year old surfer, this is definitely your spot. Otherwise, you might feel a little decrepit.

Hotels and hostels in Byron Bay generally have a minimum length stay during the New Year’s holiday. If you want to make the trip, you’ll need to plan well in advance and be prepared to spend 4 or 5 nights in the city. If you aren’t going to the nearby music festival, there isn’t a whole lot going on around Byron Bay besides the good surfing and decent trips to the inland wine country so 5 days is a pretty big commitment.

Lovers of live music will find heaps to choose from in Byron Bay on New Year’s. Clubs charge quite a lot for admission and great acts will sell out, so plan ahead. There is generally a large music festival held near Byron Bay around New Years, and bus transportation is available from the city.

Part of the appeal of spending New Year’s Eve in Byron Bay is staying up all night on the beach to watch the sun rise. Located at the Westernmost point of Australia, you’ll be one of the first people in Oz to see the first sunrise of the year.