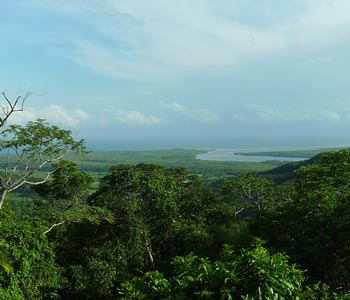 When most travelers venture into tropical North Queensland, the defining purpose of their journey is usually to experience the stunning biodiversity of the Great Barrier Reef– the so-called “rainforest of the sea”. But what so many waterlogged adventurers tend to overlook are the rainforests all around them on land too. In particular, Australia’s Greater Daintree Rainforest has been standing continuously for over 135 million years, making it the oldest existing rainforest in the world. Thus, whether you’re a seasick biodiversity buff, a land-loving globetrotter or just a wannabe naturalist aching for everything North Queensland has to offer, Daintree National Park simply can’t be ignored.

World Heritage Listed, Daintree National Forest is home to over 18,000 known plant species, and some trees in the park date to over 2,500 years old. It’s quite possible that within your first 100 meters of setting foot in the park you’ll have already passed by more species of tree than exist in all of the mainland of the United States and Canada combined. 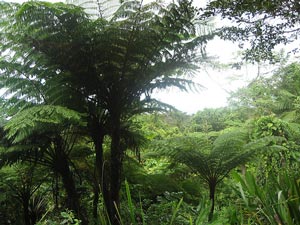 Keep alert for the fauna too. There are parrots, goannas, tree frogs, estuarine crocodiles, flying foxes and the famous cassowary– a brightly colored, ostrich-sized land bird. In fact, the region contains the highest number of plant and animal species on Earth that are threatened with extinction. Every fleeting glance you take in this mesmerizing forest is unique and valuable.
And the park is close and accessible too. It’s only 100 km northwest of Cairns— North Queensland’s most popular travel destination, and buses leave regularly. Once you arrive, there are a number of trails and destinations that are musts:

The destination of this track, Cape Tribulation Beach, is simply one of the most remarkable and scenic stretches of coastline you’ll find anywhere in the world, and getting there is half the adventure. You can access this trail from Cape Tribulation village, where it begins along a wooden boardwalk through mangroves. After about a kilometer, you’ll encounter a creek that you’ll have to cross that varies in level depending on the season and the tide. If you can manage it, arrive during low tide to avoid a soggy and potentially leechy crossing. The entire hike shouldn’t take you more than 45 minutes each way, but it’s better not to rush. You never know what creatures may be lurking up in the canopy.

This is one of the easier and more popular walks in the park, often inundated with tourists fresh off a nearby tour bus. Avoid the jam by getting there early and doing it first; but don’t be deterred if you don’t arrive before the rush. The walk is certainly worth it either way. This half hour walk leads you through high value rainforest replete with educational signposts that are a perfect prep for more challenging hikes later in the day. The boardwalk eventually ends at Oliver Creek, where you’ve got a great chance at eying some of Daintree’s more reputable residents– estuarine crocodiles.

This looping 1.8 kilometer boardwalk begins and ends at the Dubiji car park. Along the way you’ll meander through lush rainforest and eerie mangroves, and there are lots of informative signposts along the way describing the oddball flora and fauna which may be mysteriously lurking all around. You can also do this trek along the trail from Myall Beach to Cape Tribulation Beach, which is recommended for anxious visitors with more ambitious hiking plans later in the day.

Definitely the “challenging” walk of Daintree’s designated tracks, this isn’t a hike for the faint of heart or the ill-prepared. Leading high into the mountains behind Cape Tribulation, there’s no beating the views from its multifarious lookouts and bluffs. On a clear day you can see all the way down the Cape Tribulation Beach coastline and out at the jagged ocean reefs. This is definitely the rugged Australian adventure you came here for, but bring lots of water and insect repellent– really, you’ll need it. This hike is also your best chance at a truly intimate encounter with the park’s wildlife, but be careful what you wish for– that’s most likely to mean mosquitoes and leeches (yes, leeches!). Don’t worry, the leeches are harmless, but there are real dangers too. Always stay on the trail and respect any signposts and warnings along the way. And give yourself plenty of time, the round-trip trek should take you about six hours to complete.

Bryan Nelson has been making up for lost time since finishing his graduate degree in Philosophy by traveling and working to change the world. He has lived in Australia, and has recently returned from backpacking throughout South America and Europe. Between adventure and activism, he currently can be found doing freelance writing from his home in Portland, Oregon.