Hiking Uluru, and Why You Probably Shouldn’t 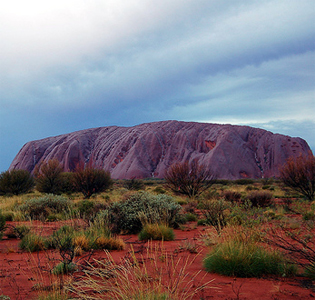 Uluru, or Ayers Rock, has become one of Australia’s most iconic travel destinations. Its allure is undeniable: sitting at the very heart of the flattest continent on the planet, its jettisoning, majestic red walls and hubris shape demand recognition; as if to remind all of its visitors that this place is anything but ordinary. Aside from the nearby Mount Olga, it’s the only significant landmark for hundreds of miles around, so Uluru defines the landscape of the vast Australian outback.

Perhaps for this reason, many travelers find it difficult to shrug off the beckoning, spiritual urge it compels to climb it. Climbing Uluru is certainly possible, and many travelers do make the trek to its summit every year. A chain handhold was added in 1964 and extended in 1976, making the half mile climb easier and more accessible for tourists, but it’s still a difficult hike to the top.

If you do decide to climb, make sure to arrive prepared. The hike can be strenuous for climbers who don’t have an above average fitness, and it can be steep and very windy. On some occasions the hike is even closed due to high winds. Also, temperatures can soar during Australia’s hot and arid summer days. So bring plenty of water, sunscreen and your most trustworthy hiking shoes. There’s a good reason for those trendy Australian hats!

All of that said, as any visitor to Uluru will attest, there are also some significant ethical concerns to consider before deciding to make the climb. Specifically, the local Tjukurpa and Anangu people choose not to climb Uluru due to the site’s great spiritual significance, and they kindly request that visitors don’t climb it either. The climbing path crosses a sacred “Dreamtime” track, which the locals only trek for ritualistic purposes. In fact, as you arrive at Uluru you’ll notice signs posted right at the foot of the climbing trail asking visitors not to climb. The juxtaposition may seem paradoxical, but for the conscious traveler, seeing the site shouldn’t be removed from experiencing– and respecting– the unique cultures of the region too.

But don’t fret if you’ve come here to hike! There are plenty of spectacular hiking alternatives both at Uluru and in the surrounding area for those who wish to respect the locals’ wishes but still have an itch to walk, explore and scope out the wondrous landscape.

Hiking Around Uluru – The Base Walk 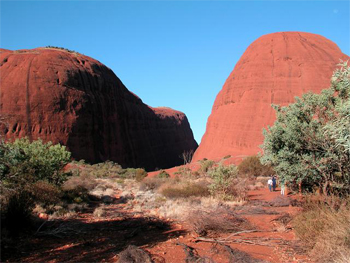 This is a 9.8 km hike around the circumference of Uluru (yes, it’s really that big!). Not only does opting for this hike show respect to the Tjukurpa and Anangu, but it also allows the visitor to better grasp the awe-inspiring scope and monolithic size of the rock. Many of the same views you can get from the top of Uluru can also be found along this hike, so you don’t really have to sacrifice much. And the hike includes things you can’t see from the top too, including a number of waterfalls and waterholds. It’s a more intimate hike, allowing visitors to get up close and personal with the wrinkles, curves and patterns of erosion which define Uluru’s rugged character.

Uluru commands such incredible charisma that many visitors aren’t even aware of everything else that Uluru-Kata Tjuta National Park has to offer. Not far from Uluru (just 25 km) is a group of 36 rock domes that date back 500 million years. Named the Olgas, or Kata Tjuta (meaning ‘many heads’), these spectacular formations offer views and hikes which rival Uluru’s. The highest point, Mount Olga, is actually 203 meters higher than Uluru. There are two principle trails that visitors absolutely must take.

Walpa Gorge (Walpa means ‘windy’) is a desert refuge for many of the Park’s plants and animals. Thus the walk’s 2.6 km length allows for a truly unique look at the vastness of the landscape. The track follows a natural creek between two of the tallest domes of Kata Tjuta, and eventually ends at a glimmering rock pool and a sharp cliff face.

The Valley of the Winds Walk

At a length of about 7.4 km, this hike is much more challenging than the Gorge hike but equally as rewarding. The walk can be stony and windy, so don’t forget to watch your steps while looking out at those marvelous views. There are several worthwhile lookouts along the way, and the track showcases the diversity of the landscape as it winds between domes and then flattens out into the surrounding valleys. By the end of the hike you’ll be left with a euphoric feeling of being squeezed, but gently, and then released into Australia’s vast central plains.

For more, read about Isabelle’s trip to Uluru on Isabelle’s Travel Guide.