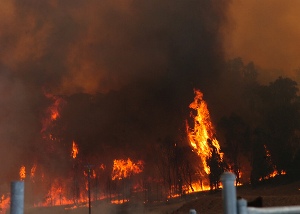 Just like other countries in the Southern Hemisphere, Australia’s seasons are as follows:

This means that Santa Clause can’t really use a sled to visit the Australian kids, while the mid-year school break takes place during winter.

Although the names of the seasons are the same as in the Northern Hemisphere, the weather patterns are totally different. For example, Australia is a very arid area hence the summers tend to be way hotter than in the Northern Hemisphere, while the rain can be either very abundant or not present at all. As a matter of fact, the indigenous Australians had their own seasonal calendar, sometimes having as many as six seasons.

Read more about the weather in Australia through the following articles:

As much as 40% of the continent is covered by sand dunes, making Australia the driest country. Australia is also the flattest continent and has the least fertile soils.

The tropical regions are found in the northern part of the continent and include the northern parts of the Northern Territory, Western Australia and Queensland. Here the weather has two seasons: wet and dry.

The wet seasons lasts between December and March and is hotter than the dry season. The temperatures can reach as much as 30 C / 86 F to 50 C / 122 F. The humidity is very high and due to the abundant rain flooding is quite common.

The dry season lasts between May and October with temperatures averaging 20 C / 68 F.

The dry regions are found in central Australia comprising most of central and southern Western Australia, all the way to the southern parts of the Northern Territory and most of South Australia, the far west regions of Queensland and New South Wales and the north-western parts of Victoria.

The summers are hot with temperatures reaching as much as 30 C/ 86 F in the summer. The winters a cold but the average temperature is about 15 C / 59 F. During summers the heat waves are quite common, while the winters then to be wet and windy but quite mild if compared to the European winters.

The dry weather also contributes to the occurrence of bushfires. They are large, out of control and occur in the bushland. The high temperatures and the sunshine make the trees and grass very dry, hence a perfect “fuel” for a bushfire. Eucalyptus tree, which have a lot of oil in them, are especially dangerous in a bushfire.

Cyclones are usually encountered between November and April and are common in the tropical climate. Every year, about six cyclones hit the Australian coas