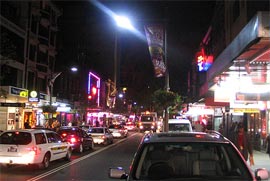 Travelers searching for affordable accommodation in Sydney will quickly discover that all the cheapest places they find are either in Kings Cross, or way outside the city center. Most of these people choose ‘The Cross’ as it’s locally known, and this is probably a wise decision, although it helps to know what to expect.

Kings Cross is about 2 kilometers east of ‘downtown’, which is called the Central Business District, or CBD, in every Australian city. It’s surrounded by other neighborhoods on each side, so it’s not immediately apparent when you are leaving or entering the official Kings Cross neighborhood, at least until you are on the main section of Darlinghurst Road.

From Kings Cross it’s a fairly easy walk to the CBD, the Sydney Opera House, and everything else notable in the city center. There is a Kings Cross train station that can be used to go one stop closer to the CBD, but it’s not on the same line as the City Circle trains that ring through the area, and transferring to that line takes a bit of backtracking. If you are tired or it’s raining you can take city buses into the CBD as well. 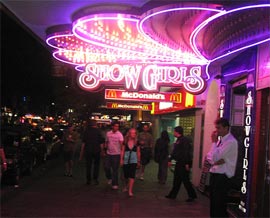 Dating back even before World War II, Kings Cross has been Sydney’s main Red Light District, and that dubious distinction remains even today. Along Darlington Road you find an odd collection of lowbrow strip clubs, adult bookstores, and even some streetwalking prostitutes. The area has gotten better over the years, but these seedy elements do remain to some degree. The area is generally very safe during the day, but late at night you are likely to run across a few obnoxious drunks and other troublemakers, and muggings do occur, so it’s best not to walk around alone then if you can avoid it.

What you’ll find in Kings Cross

Aside from the aforementioned adult-themed attractions, the area has an ever-increasing amount of pubs, nightclubs, and trendy little restaurants, as well as a healthy collection of fast food outlets, internet shops, souvenir stores, travel agencies, and other normal businesses catering to the residents. This area is also filled with cheap hotels and hostels/backpackers, so many of the businesses thrive on this transient business.

Backpackers and hostels in Kings Cross

There are quite a few Sydney hotels mixed in to this area, and many of them are on the affordable side of things, but this part of town is more famous for its hostels, which are called ‘backpackers’ in this part of the world. There are about a dozen Sydney backpackers in and just around Kings Cross, and four of the larger and more famous ones are:

The first of these is right on Darlinghurst, and the other three are bunched together on Victoria Street, which is the next main street to the west, running at an angle from Darlinghurst.