Getting to the Whitsundays 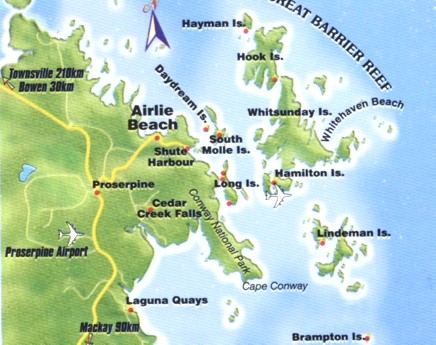 A group of 74 spectacular tropical islands, the Whitsundays are a must-see for travelers planning on spending time in Queensland, Australia. With azure blue waters, beautiful snorkeling and scuba diving on the Great Barrier Reef, white sand, green capped island tops, and tons of activities for visitors—it is no wonder why so many backpackers, honeymooners and 5-star travelers visit the Whitsunday Islands.

The Whitsundays is served by 2 different airports, giving you options for finding cheaper airfare to the islands if you choose to fly. The Great Barrier Reef Airport on Hamilton Island (yes, the location of the Best Job in the World) is serviced by JetStar, Virgin Blue and Qantas—with direct flights from Melbourne, Sydney, Brisbane and Cairns. This is your best bet if you are hoping to either stay on Hamilton Island or launch your exploration of the islands from Hamilton.

The Whitsunday Coast Airport in nearby Proserpine is serviced by Virgin Blue and Jetstar, with direct flights from Brisbane and connecting flights to all major Australian cities. For those staying in Airlie Beach, this airport is probably your best bet.

There are also air transfers available by helicopter, light aircraft or seaplane from the Great Barrier Reef Airport on Hamilton Island or the smaller, non-commercial Whitsunday Airport located between Airlie Beach and Shute Harbor.

The Bruce Highway (which runs all up and down the east coast of Queensland) links Queensland’s major cities and towns, including Proserpine (where the Whitsunday Airport is located). Just north of Proserpine, you will see the exit east towards Airlie Beach and the surrounding communities. Further north on the Bruce Highway you will find Bowen.

There are a few major coach operators, which run buses from major cities along the coast to the Whitsundays. A popular mode of transportation among budget conscious backpackers, coach services may be a more time consuming way to travel, but are also sure to save you money.

Greyhound Australia has buses that travel between almost all of the major cities/towns in Australia. There is regular service to Airlie Beach from all up and down the coast as well as from western Queensland.

>>See a map of Greyhound bus routes in Australia

You can also travel by rail to the Whitsundays. Traveltrain provided long range passenger rail services in Queensland and these trains link the Whitsundays (the station is located in Proserpine) to coastal centers in Brisbane and Cairns. The Tilt Train (which runs Brisbane-Rockhampton and Brisbane to Cairns) and the Sunlander (which runs between Brisbane and Cairns) both stop in Proserpine.

Getting to/from the Airport and Train Station

There are scheduled bus services that operate 7 days a week and connects Proserpine (including the Whitsunday Coast Airport and Proserpine Rail Station) to Cannonvale, Abel Point Marina, Airlie Beach and Shute Harbor.

Taxis from the Proserpine Airport will cost you close to $50AUD, but are still an affordable option if you are willing to share with other travelers.