Getting to the Great Barrier Reef 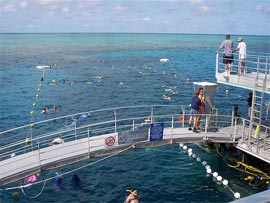 Since you obviously can’t fly directly to the Great Barrier Reef itself, it’s a common question from visitors as to exactly where it is, where you should stay, and how you should get there. We’ll go over all of that below, and spell out your various options for visiting this famous world wonder.

Where exactly is the Great Barrier Reef?

The Great Barrier Reef is located in the Coral Sea, just off the northeast coast of the Australian state of Queensland. The reef, as you know, is huge, so it can actually be reached from quite a few different cities and islands along this long coast, although the most popular by far are Cairns, Prosperpine, and Townsville.

Cairns
Being the staging area for most GBR trips, Cairns is quite well known by non-Australians, though it’s not really a particularly large city, with a population of only around 130,000. Particularly for Americans, it can be confusing when locals pronounce it as “cans” in a way that might not ring the Cairns bell in your mind right away. Another thing to remember is this area is tropical, so the climate is very different from Sydney or Melbourne.

Prosperpine
This small city of only about 3,000 is home to an airport that is often referred to as Whitsunday Coast. It’s about 20 kilometers inland from Airlie Beach, which is one of the better GBR trip staging areas.

Townsville
About 220 km up the coast from Airlie Beach you’ll reach Townsville, which is actually about the same size as Cairns, though far less famous internationally. There’s a fairly busy international airport in Townsville, which has a few flights directly from Samoa and New Zealand, though it’s mostly served by Australian cities.

Flying to the Great Barrier Reef

Cairns is by far the most popular flight destination in this region, and you can reach it fairly inexpensively from about 15 large Australian cities, as well as from Bali, Japan, New Zealand, and Singapore. Flights within Australia can range from cheap to insane, and flights into the other two tend to be more regional and more expensive, but if you want to go to one of them flying directly from another Australian city is probably a better option than flying into Cairns and then going from there.

Getting to the Great Barrier Reef by train

Believe it or not, you can get here on the train, though it’s not cheap or fast. From Sydney you have to take a 14-hour journey to Brisbane, where you’ll spend part of a day and then change to a 3 times per week departure for Cairns, which takes about another full day, so the entire journey takes about 2 days, including half a day waiting in Brisbane. You can take the same method to reach Prosperpine, although that takes about 12 hours less, and Townsville can be reached about 7 hours before the same train gets to Cairns.

Getting to the Great Barrier Reef by bus

The method for getting from Sydney to Cairns by bus is pretty much identical to the instructions by train, although the part from Brisbane to Cairns takes at least a few hours longer. You can buy a bus pass that allows unlimited travel between Sydney and Cairns on these buses, so one of those is probably a far better option that trying to bomb it in one go.