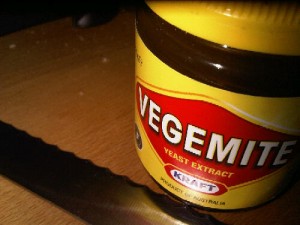 Australia has heaps of good food, and it ranges from Asian to seafood and Aussie to pub grub. You can find all the best types on the famous foods in Australia guide.

This guide is different, though. This list is of the iconic foods and dishes in particular are just so Australian you can’t hear or read about them without associating them with Down Under.

Vegemite
It’s a mystery to most people what this dark brown paste is made from, but when you find out it is the yeast extract, that which is normally left over from beer production, you know this stuff is Australian. Vegemite has a very distinct, salty taste and is usually used as a spread on toast.

Chiko Roll
The chiko roll is a deep-fried roll, resembling the Chinese egg roll and spring roll. It consists of mutton, cabbage, celery, barley, rice, carrot, spices, all wrapped in dough and then deep fried. 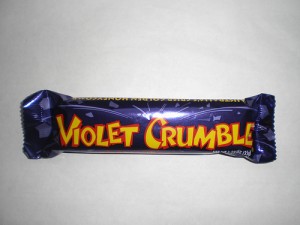 Violet Crumble
The violet crumble, which resembles a Crunchie, is a chocolate bar in Australia filled with a honeycomb inside. The bar should be crisp and crumbly, and not sunken and stale.

Jaffas
Jaffas are a round sweet made of a chocolate center and hard covering of orange flavored candy.

Tim Tams
Tim Tams are delicious, chocolate coated cookies. These cookies come in the basic chocolate filled version, but many new and interesting flavors are on the market today including caramel or cherry filled biscuits.

Weet-Bix
Weet-Bix is a wheat-based breakfast cereal that is served in a brick form. Weet-Bix is a popular sponsor of youth sports in Australia.

ANZAC Biscuits
Anzac biscuits are cookies made from rolled oats, coconut and syrup. They resemble oatmeal cookies, but also have special significance to veterans of war. 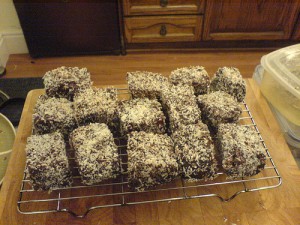 Lamingtons
Lamingtons are sponge cake cubes coated in chocolate icing and coconut. They are great snacks to have with tea.

Pavlova
Pavlova is a meringue dessert, crispy on the outside but fluffy inside. It is usually topped with fresh fruit, especially passionfruit, and cream.

Musk Stick
The musk stick is a candy of particular interest to the Aussies, but not so much to people of other countries. It’s a pink stick with musk flavors, believe it or not.

Meat Pie
The meat pie may be a British idea, but the Australians have taken it as their own. These pastry pies are filled with a meat and gravy sauce, although flavors can range from vegetarian to curry and more.

Milo
Milo is a malt drink mix that is usually stirred with milk – either hot or cold. It acts as a breakfast drink or snack and usually comes off with a slightly gritty texture.

Schnitzel
Schnitzel would normally be associated with Germany, but Australians love this fried meat dish. You can get a schnitzel on most pub menus.

This list is going to grow as more iconic Aussie food posts make it to this blog. You can subscribe to follow along, and as always, let me know if I missed something by leaving a comment below!