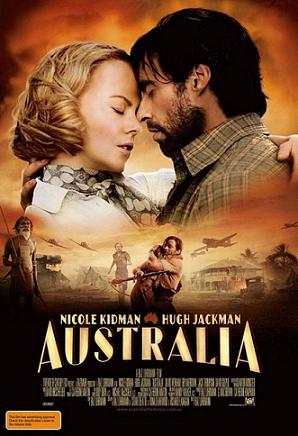 When a movie shares the name of a country, it’s not surprising that there is a lot riding on its success. ‘Australia’ is a big-budget epic directed by Oz native Baz Luhrman, who’s had success with each of his first three films, Strictly Ballroom (1992), Romeo + Juliet (1996), and Moulin Rouge! (2001). The film opens on November 26, 2008 in both Australia and the United States, and it opens in countries around the world over the following two months.

Not only do the studio and the director hope for Oscar nominations (Luhrman’s Moulin Rouge was nominated for Best Picture at the Academy Awards), but the government and tourism boards throughout the country hope the film will help spark a much needed boom in visitors, much the way Crocodile Dundee did in the late ‘80s, and the Lord of the Rings trilogy has helped New Zealand with a steady stream of new visitors looking to explore the filming locations. With a budget of US$130 million, and nine months of filming, the stakes are indeed high.

Not long before the outbreak of World War II, Lady Sarah Ashley is an English aristocrat who inherits a ranch in Australia and goes to claim it. She discovers the ranch, known as Faraway Downs, is the target of a cattle baron named King Carney, who is trying to monopolize the cattle business in the area. In order to save the ranch, the woman reluctantly teams with an experienced drover to move 2,000 head of cattle across an unforgiving landscape. Before they reach their goal, they witness the Japanese bombing of the city of Darwin, which suddenly changes everything.

After years of various delays and cast changes (Russell Crowe was first signed as the lead, and then Heath Ledger was considered before Hugh Jackman eventually landed the role), filming of some of the interior shots began at Fox Studios in Sydney in April, 2007, and completed in December, after exterior filming was done in the two locations mentioned below.

The Faraway Downs ranch owned by Kidman’s character is set in the Kimberly region of Western Australia. The actual filming of these scenes took place on newly built sets in the small town of Kununurra, which is near the northern coast in the Kimberly district and about 300 miles (500km) from Darwin, which is in the Northern Territory.

The scenes meant to be Darwin toward the end of the film were actually filmed in the town of Bowen in Queensland, which is nearly 2,000 miles away from the real Darwin. Needless to say, the entire set recreating a WWII-era Darwin was built from scratch in Bowen, and that town of 7,000 residents, which is located near Airlie Beach in the Great Barrier Reef region, is also hoping for increased interest from tourists.

Not waiting to see if the movie will be successful or not, the tourism board of Western Australia has launched a US$1 million promotional campaign to help moviegoers discover the real life areas that inspired the film’s locations, as well as the Kununurra region where much of the film was actually shot. Check out the website that Western Australia has launched that ties in to the film.