Getting from Brisbane to Darwin 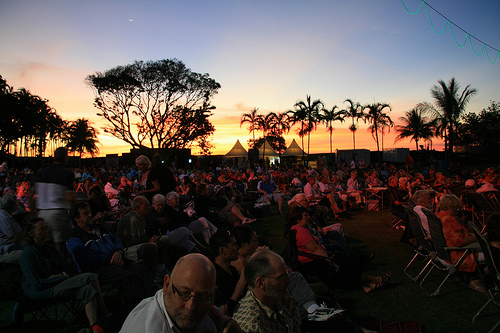 Following in line with this short series on getting to Darwin is the transportation options for getting to Darwin from Brisbane. Even though both are in the northern part of the country, Brisbane is still a good 2,849 kilometers in a straight line (as the crow flies) from Darwin. These transport tips will help you plan your trip accordingly.

You may also be interested in learning about getting to Darwin from Melbourne, from Sydney and from Cairns. Learn about your destination through the Darwin Travel Guide, book a cheap hotel in Darwin city and plan for fun and exciting day trips.

Getting from Brisbane to Darwin by Plane

It pretty much goes without saying that the fastest way to cover the distance is by a cheap flight from Brisbane to Darwin. The direct flight will run about 4 hours and 15 minutes in length, 3 times a day on either Qantas, Jetstar or Virgin Australia. To start your planning process, you can search for cheap flights to Darwin International Airport, or use the quick search below for discount fares and deals.

Search for flights to Darwin (DRW) from Brisbane (BNE), Melbourne (MEL) and Sydney (SYD) using the widget below.

Getting from Brisbane to Darwin by Train

There is no direct train from Brisbane to Darwin, so going this route by train will either involve splicing in another mode of transport or taking the very, very long and scenic route. The first option is to take a bus from Brisbane over to Alice Springs or Tennant Creek in the Northern Territory where you will then transfer onto the Ghan, a long-distance train line that runs all the way up to Darwin.

Another option would be to take the CountryLink train lines from Brisbane to Sydney, and then transfer to the Indian Pacific line until you reach Broken Hill. At Broken Hill, you can continue on to Adelaide before starting the long journey north on the Ghan. Obviously, this is not the most direct route (*laughs*), but it will be scenic.

Yet another option would be take CountryLink and the Overland trains from Brisbane down to Adelaide (a very scenic roundabout trip). In Adelaide, you can start from the beginning of the Ghan and head north for the two night journey to Darwin.

Getting from Brisbane to Darwin by Car

The shortest route on Google Maps for driving from Brisbane to Darwin is listed as 3,426 kilometers along the Landsborough Highway and the Stuart Highway. Once you get to the Tennant Creek area of the Northern Territory, you will head north on the Stuart Highway until you reach Darwin. The route can be found on the map below.

An alternate route would be one that goes 3,568 kilometers as shown on the map below. This route will first take you north up to Rockhampton, Queensland before heading inland to the Northern Territory.

Driving in Australia should not be something treated lightly. You have to be prepared for long distances, lots of kangaroos that might jump on the road and unsealed roads. Always remember to stop often and pay very close attention to petrol levels when heading outback especially.

Getting from Brisbane to Darwin by Bus

Buses do run from Brisbane to Darwin. You can catch a ride on Greyhound on this route for a 48 hour ride and a ticket that runs $640, but your best option would be to break the trip up. Buses give you more space than a car, but they give you less space and convenience than a train. What this means is you’ll be sitting for a large chunk of time on the trip, unless you break it up into smaller trip segments. With Greyhound, you can buy certain tickets that allow you to hop-on or hop-off either in a certain direction along a path or up to a certain number of kilometers.

Another option to make a bus trip like this more enjoyable would be to join a tour group that completes the route but also stops off at the main sites along the way. Have a look at the Australian tours page for options.