Bondi Beach and how to visit 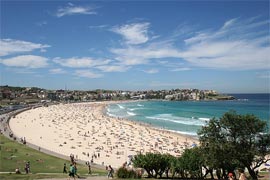 If you’ve seen only one Australian beach on a travel show or in a magazine, it was probably Sydney’s Bondi Beach (pronounced BOND-eye), which is easily the most famous in the country in spite of only being about 1 kilometer long. The country is overloaded with excellent and often secluded shorelines, but this picturesque cove in the suburbs of Australia’s largest city gets much of the attention due to its beauty, convenient location, and good surfing conditions.

During Australia’s summer months of December through February, the beach is nearly always packed with sunbathers, and the water is filled with swimmers and surfers. During the shoulder seasons the weather is often warm enough that things on the sand stay very busy, but during the winter months the temperatures are almost always too cool for sunbathing so the crowds consists of surfers in wetsuits and the various onlookers.

Bondi is the closest proper beach to downtown Sydney, which is known as the Central Business District. It’s about 9 kilometers east from the Sydney Opera House and Circular Quay, and about 8 kilometers from the Kings Cross backpacker district. The beach itself is surrounded by a village with about 10,000 residents and nearly endless facilities for tourists and visitors. 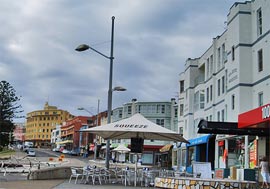 As mentioned above, there is a lovely town that surrounds the sandy beach, and this is as much of an attraction as the water for many people. There are several popular hostels and quite a few hotels mixed in, but the main attractions are the innumerable bars, restaurants, surf shops, and gift shops throughout the area. Those visiting Sydney for 3 days or more might consider spending at least one full day and night in Bondi, since the vibe is completely different and it’s very easy to stay busy here, at least during warmer months.

There are definitely some tricky aspects to surfing off Bondi Beach, but overall this is rated in the beginner to intermediate range of difficulty. Combined with its overall popularity, this makes Bondi an ideal place to take surfing lessons for those starting out or who want to hone their skills. There are many outfits offering both private and group lessons, with prices starting around AU$70 for a 2-hour class. If you are in Bondi you can compare a few schools by just walking along the streets near the beach, or you can check out information from one of the more established companies that have good websites, like Let’s Go Surfing, for example.

Getting to Bondi Beach

If you are just visiting Sydney as part of a larger trip, you’ll be happy to know that getting to Bondi is quite easy just using public transport. There are a few hop-on/hop-off bus tours of Sydney that include Bondi as a hop-off stop, so that’s always an option, but if you want to spend more than an hour or two here it’s pretty easy to catch a public bus.

Map of Bondi Beach in Sydney