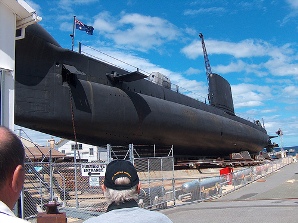 Every Australian city is home to numerous museums, making it a really hard task to select just some of them to talk about. Therefore, this page is about some of the most popular museums in Australia.

Queensland Museum, located in Brisbane, was founded in 1862 and had many temporary homes, including the Old Windmill.

One of the most popular features is the “Dinosaur Garden”, which comprises life-size dinosaur models of T-Rex and Triceraptos. Another popular item is Mephisto, a German A7V Tank captured during World War I. These items were moved to the Queensland Cultural Centre, when the museum was relocated there (since 1986 the museum is housed in the centre).Within the museum, there are numerous exhibitions including sever other dinosaurs.

National Museum of Australia, although established in 1980, it didn’t have a permanent home until 2001.The museum, located in Canberra, preserves Australia’s history, exploring the events and people who shaped the nation.

The most extensive permanent exhibition is called First Australians and is devoted to the stories and experiences of the Aboriginal and Torres Strait Islander peoples. You can explore the indigenous art, while being greeted by indigenous dancers. A 1920s mission hut is displayed and visitors can explore its interior. There is also a sand sculpture used in burial ceremonies and a Torres Strait Islander outrigger canoe. The cultures and communities are also very well presented, offering the visitor a detailed outlook of the indigenous peoples.

The museum is opened daily, except on Christmas Day, from 9 AM to 5 PM and the admission is free.

National Dinosaur Museum was established in 1993 when it started out as a small collection of fossils. Today it’s one of the most popular attractions in Canberra. The museum houses 23 complete skeletons and 300 fossils, all found in Australia. The museum organizes special activities both for school kids and the general public.

The museum is opened daily, except on Christmas Day, from 10 AM to 5 PM and the tickets cost AUD 7 for children over 4 years old and AUD 10 for adults.

The New Maritime Museum on Victoria Quay, Fremantle, has been recently opened and has six themed galleries, including The Indian Ocean, Tin Canoe to Australia II, Fremantle and the Swan River, Hooked on Fishing, Cargoes and Naval Defence.

The Shipwreck Galleries display restored ships as well as remains of famous ships, such as Batavia (discovered and excavated in the 1970s).

The Submarine Ovens make it possible for tourists to explore the interior of a real submarine. The tickets can be bought at the New Maritime Museum, where the tours leave from. The submarine is opened daily, except on Christmas Day and Good Friday, from 10 AM to 4:30 PM.

Here you can read more about the Western Australian Museum.