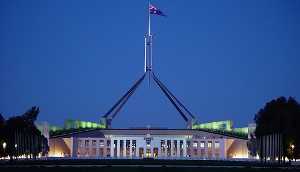 Australia’s capital, Canberra, is famous for its parks, monuments and beautiful architecture. Enjoy a walk in one of its numerous parks or take your kids to the aquarium or wildlife park. Visit the monuments, galleries and museums and in the evening enjoy a night out in one of the popular nightclubs.

Canberra is located about 150 km /93 miles inland from Australia’s east coast, at 280 km / 174 miles south-west of Sydney and 650 km / 404 miles north-east of Melbourne in the Australian Capital Territory.

How to get to Canberra

Canberra International Airport is served by a lot of domestic airliners. Tourists coming from abroad have to fly to Sydney or Melbourne and then take a domestic flight to Canberra (both flights take about an hour).

By train, you can take the NSW Countrylink from Sydney twice a day. The ride takes about 4 and half hours, longer than the bus ride.

By bus, Murray’s Coaches link Canberra to Sydney. The express ride takes about 1 hour and a half and drops you right in the middle of the city. Greyhound Pioneer competes with Murray’s for the same route so you might manage to book a cheaper ride.

In the capital, the climate is temperate. There are four seasons, but because the city is relatively close to the coast, the climate is moderated by the sea. The summers are dry and hot, while the winters are damp and cold. The average temperature during the summer is 83 F, while during winter is 32 F. Snowfall can occur but never lasts for long.

>> Read more about the weather in Australia

Canberra is blessed with incredible sites, a real pleasure for the nature lovers. Due to its lakeside location and countless parks, completed by lush vegetation in the suburbs, Canberra attracts the tourists like a magnet. Those who prefer to walk can spend hours on the streets that circle the site, while those who aren’t that keen about exercising during vacation can choose a tour bus.

If you visit Canberra during spring, plan to enjoy Floriade, a month long festival of color –more than 1 million tulips -taking place in the Commonwealth Park. In 2008 the festival takes place between September 13 and October 12. 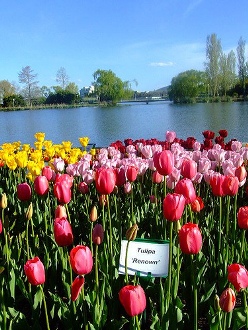 Telstra Tower is another important landmark. Also called Black Mountain Tower, it’s located in the middle of the Canberra Nature Park, offering great views of the city and the countryside. There are inside and outside galleries, a café, a revolving restaurant, the telecommunication museum and a gift shop. The Tower is opened daily from 9 AM to 10 PM and the tickets cost AUD1.10 for children and AUD3.30 for adults.

Australian National Botanic Gardens is home to collections of plants and trees from all over the country. The tourists particularly enjoy the rainforest, the eucalyptus lawn and the rock gardens. If you get hungry, you can either enjoy a meal at the café or picnic among the beautiful plants. The admission is free and there are free garden tours daily.

National Aquarium and Wildlife Park is a must for any family and nature lovers. Enjoy the marine life from “beneath” by walking along the underwater tunnel, hand feed the emus and kangaroos or pet a koala. Then take a long walk in the park. If you happen to get hungry, enjoy a meal at the bistro located within the park. The tickets cost AUD6.60 for children and AUD11 for adults.

When the night falls, choose among one of the night clubs or restaurants and spend some quality time in true Aussie style. Bar 32 is the hottest place to be, located in the heart of the capital. The club is very popular among tourists and students but also appeals to locals. If you want to impress, dress smart casual.

Plan a Trip to Canberra