Getting from Sydney to Cairns 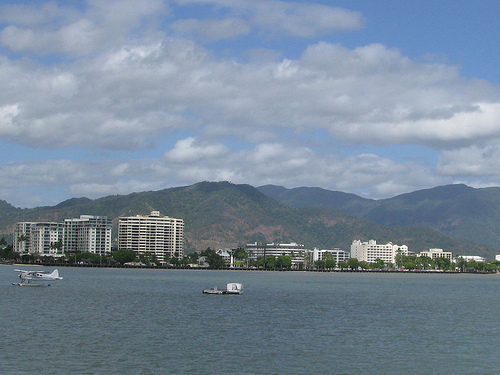 Some people are completely unaware of the massive size of Australia, and more particularly about the massive distance that goes from Sydney to Cairns – a top tourist destination. Just last year, I did the drive in from Cairns to Sydney and it is a feat that should not be taken in less than a week in my opinion, especially if you actually want to see something along the way.

As the crow flies, there are 1957 kilometers in between Cairns and Sydney, but it is a distance that can be covered in a number of ways: flight, car, campervan, bus or even boat.

Getting from Sydney to Cairns by Cheap Flight

Being the popular tropical destination that it is, Cairns has a number of flights entering its smallish airport daily, herding in the tourists looking to experience such sites as the Great Barrier Reef and the Daintree Rainforest. You can get there by searching for budget flights to Cairns, which will typically run in the 3 hour range. There are about 9 to 11 flights going this route each day from carriers like Qantas, Jetstar and Virgin Australia.

Getting from Sydney to Cairns by Car

You’ll get more adventure if you drive the distance from Sydney to Cairns. The shortest route is somewhere in the 2400 kilometer range, but the coastal route that takes you to the top attractions along the Bruce Highway runs in the 2650 kilometer range. While longer, the second option is the one I recommend as you can stop off easily at such places as Brisbane, Hervey Bay and Townsville – all located on the coast.

>> Have a look at the 16 day itinerary I took from Cairns to Sydney last year.

Getting from Sydney to Brisbane (or getting from Brisbane to Sydney) is ad adventure all on its own. From here to there, you can visit Newcastle, Port Macquarie and the Gold Coast. Getting from Brisbane to Cairns involves a really long stretch of road up towards Mackay, where you can stop off and visit the Eungella National Park (for the platypus viewing), and further on to Townsville and Mission Beach.

Getting from Sydney to Cairns by Train

It’s a journey for sure getting from Sydney to Cairns by train. The process will be broken up into two different routes, the first being the Sydney to Brisbane train on the CountryLink XPT train. The second route will be from Brisbane to Cairns on a few different Queensland Railways trains, such as the Sunlander or the Tilt. The journey will last approximately a day and economy tickets in a sleeper berth will go for around $275 one way.

Getting from Sydney to Cairns by Bus

By Greyhound, it is a long 46 hour bus ride from Sydney to Cairns, a trip that should be broken up to see the sites along the way if possible. There are hop-on and hop-off options for this route that would make it more like the driving route, but the bus transportation option is still not going to be quite as comfortable as taking the train where you can get up and walk around freely, or lay down in a proper bed.

Getting from Sydney to Cairns by Boat

With both Sydney and Cairns being on the coast, you can get from one to another via boat or a cruise. There are several popular cruise lines in Australia, like Princess or P&O, that go on long journeys around the country or short journeys from one port of call to the next. Have a look at the cruising Australia page for more information.