Budget Airlines that Fly to Cairns 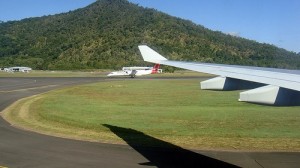 Cairns, way up in tropical north Queensland, is probably a place that you wouldn’t want to fly to at all parts of the year. There is the very wet, and ultimately very humid, summer months that can be simply unbearable to do anything except for staying submerged in the ocean or under a beautiful waterfall. However, if you should decide to go, there are plenty of things to keep you busy in Cairns like checking out the Daintree National Park or snorkeling the Great Barrier Reef.

Even though Cairns is quite far up the coast, there are a number of options for getting there that won’t always cost you an arm and a leg. Cheap flights to Cairns can be obtained by checking for the right time of year, and the right time of the week. Travel costs in Australia vary seasonally, so of course the high season is going to come with more expensive flights and fewer deals.

Budget Airlines That Fly to Cairns

The Cairns Airport (CNS) is both a domestic and international airport in the Cairns area that a number of budget airlines service. It is only about 7 kilometers away from the central business district (CBD), so taxi and shuttle transfer will only set you back a few bucks.

How to Fly Budget Airlines to Cairns

With budget airlines, you have to be aware of the “extras”, as some people would call them. For example, you might need to pay a few extra dollars to check a bag, or buy your own beverages and snacks. However, at the same time, they are budget airlines. I saw a good ad recently that explained that you only pay for what you use, and it is true. So, just be aware that flying budget is different, but it doesn’t have to be bad.