Getting from Melbourne to Darwin 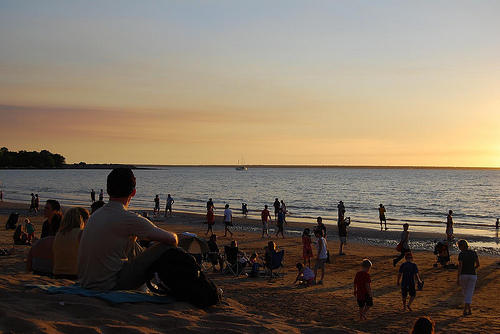 Melbourne and Darwin are pretty much on opposite ends of Australia with Melbourne deep in the south of Victoria and Darwin in the Top End of Northern Territory. The distance as the crow flies is 3,140 kilometers, which is the straight line distance. If you wish to do the trip by any way other than a flight, you are in for a long, yet potentially amazing, time.

Getting from Melbourne to Darwin by Plane

To cover the large expanse of land, some of which is very hot and barren, you can take a flight from Melbourne to Darwin. Direct flights to Darwin run in the 4 hour and 30 minute range and can be completed on Virgin Blue, Jetstar and Qantas 2 to 4 times a day, depending on the day of the week. To start your research, you can have a read through the budget airlines that fly to Darwin article, or just use the quick search option below.

Search for flights to Darwin (DRW) from Melbourne (MEL), Sydney (SYD) and Alice Springs (ASP) using the widget below.

Getting from Melbourne to Darwin by Train

Getting to Darwin by train just cannot be mentioned without first mentioning the Ghan. The Ghan is one of the long-distance train lines in Australia that is known to be one epic journey. Part of the Great Southern Rail company, the Ghan rivals the Indian Pacific, but the problem here is that you’d need to catch the start of the ride from Adelaide. In order to get from Melbourne to Adelaide, you may have to catch another local train, or ride on the Overland.

>> Read about getting from Adelaide to Melbourne for further details.

Once you are in Adelaide, you can board the Ghan for a 2,979 kilometer, 2 night ride through the Red Center to the Top End. Check out the Great Southern Rail site for more details, or watch this video on The Ghan:

Getting from Melbourne to Darwin by Car

Driving from Melbourne to Darwin is an exciting and long journey of 3,755 kilometers along the Stuart Highway. This route will start off by heading from Melbourne down to Adelaide (along the Great Ocean Road perhaps) before heading north for thousands of kilometers through South Australia to the top of the Northern Territory. Along the way, be sure to stop off at Coober Pedy and Uluru!

A trip of this nature by car should be stretched out as much as possible with stop-offs to both break up the long drive and to take advantage of the outback sites. When passing through Coober Pedy, stop off for a night in an underground hotel room, and when passing Alice Springs, try to take a trip over to Uluru. You may even want to explore it all in a campervan, which kills two birds (accommodation and transportation) with one stone.

Getting from Melbourne to Darwin by Bus

You can easily book a ticket to take yourself from Melbourne to Darwin by bus, if that is a route you want to take for such a long trip. Just like driving and the train, a simple route on Greyhound would be to take the bus to Adelaide and then from Adelaide north to Darwin. The entire journey runs for nearly 69 hours and costs around $760. Another option would be to take the bus up the coast to Brisbane from Melbourne, followed by a route inland toward Tennant Creek before heading north to Darwin.

Since it is such a long journey, I recommend – if going the bus route – to sign up for an Australian tour that will take you from south to north, but with stop-offs and tours in all the fun regions along the way.