Getting from Cairns to Brisbane 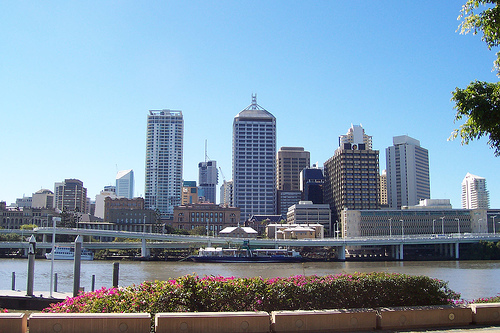 Cairns and Brisbane might be in the same state (Queensland), but they are still a good 1700 kilometers away from each other by road, or a good 22 hours if that puts it into perspective. The perceived distance is often a bubble burst when travelers arrive in the country and are put face-to-face with reality. Queensland is a giant state, and Brisbane and Cairns could not be much farther from each other and still be classified as in QLD.

My posts are probably sounding like a broken record, but as with anywhere in Oz, you’ll want to take a plane if you’re lacking the time.

>> To further plan your trip, have a look at these things to do in Brisbane. For accommodation, check out these cheap hotels in Brisbane or these great Brisbane party hostels.

Getting from Cairns to Brisbane by Plane

Cheap direct flights from Cairns to Brisbane run in the 2 hour range, but it is a very short ride in comparison to the 22 hour drive. Several airlines run this route, including Qantas, Virgin Australia and Jetstar. There are 9 to 11 flights operating daily depending on the day of the week. To get a good deal, you can learn more on the budget airlines that fly to Brisbane post, or have a search below.

Getting from Cairns to Brisbane by Train

Getting from Cairns to Brisbane by Car

Driving from Cairns to Brisbane will take around 22 hours of driving to complete, so it is not something recommended to attempt in a straight run. Plus, there are so many places along the journey that should be stopped off at and explored – everything from Mission Beach and Townsville (with a jump over to Magnetic Island) to Eungella National Park near Mackay.

From Cairns, you will head south towards Mission Beach (about 2 hours away) where you can try to spot a cassowary in the wild – but hopefully not while driving. Further on is Townsville, followed by Airlie Beach (the gateway to the Whitsunday Islands). You’re still quite far away, but the more you drive south, the closer you will get to Bundaberg and Hervey Bay. The majority of the route is on the Bruce Highway.

>> You may want to think about renting a campervan for the trip.

Getting from Cairns to Brisbane by Bus

Taking a bus from Cairns to Brisbane will run you just about the same length of time as taking a train. You have several options for buses, however, from Greyhound to Premeir Motor Service or even a tour group bus, such as Oz Experience. Greyhound is a good option because it offers hop-on hop-off passes that will help you be able to see more of the places in between the major cities – and seeing more is more fun, right! The Cairns to Brisbane Mini Traveller Pass runs $306 at the time of writing this.