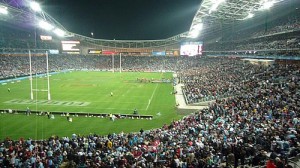 This year’s game three of State of Origin is going to be a real epic show for those watching. It turns out that, despite the Maroons (QLD) having the momentum after winning game one, the Blues (NSW) have prevailed in game two. That’s right! Each team in this rivalry has a win, meaning game three will be the tie-breaker for 2011’s series (and therefore a much more exciting game to watch than 2010’s game three). Will you be watching?!

Game 3 plays in Brisbane on July 6, 2011 at Suncorp Stadium starting at 8:00 pm. If looking for tickets to this event, you will need to check for availability from Ticketek. Unfortunately, it is looking like ticket “allocation exhausted”.

Where to Watch Game 3

Suncorp Stadium is located in Brisbane and provides for a great night of sports watching. Accessing the stadium is doable via many modes of public transport including special bus shuttles on event nights. For more information, visit the official Suncorp website.

A Brief History of Origin

The State of Origin is the ultimate best of three matches sporting event in the area of Rugby League. It features two teams, the Blues from New South Wales and the Maroons from Queensland, who have had a strong rivalry for many years. The three games are played across the period of a few months during the Australian winter. The players for each team are chosen from the cream of the crop in the state, which also adds to the intense gaming action.

Matches for the State of Origin began in the 1980s, and for gaming results in the past, I suggest having a look here.