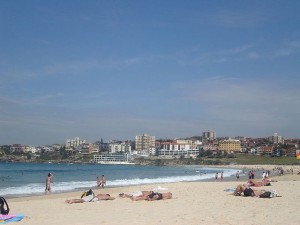 Australia in December is the place to be. The beaches fill up and both travelers and Aussies go on holiday. It might seem strange to say it, but Australia simply becomes more Australian in this month. You’ll see Aussies heading outdoors, having barbies, hitting the surf and enjoying the sun more than any other time of the year. If you’re near Sydney, then Bondi or Manly beaches will be calling your name.

The tropical north, however, will start to experience the wet season, bringing heaps of humidity to its already hot climate. If you do make it there, there are some budget airlines that fly to Cairns to investigate for cheap flights. Just beware that the marine stingers may start to make their way to the nearby waters, so use precautionary measures, such as stinger suits, when heading to the reef.

The end of the month brings the big holiday season, and if you’re coming from a colder climate, then be prepared for a very atypical Christmas as December is the beginning of summer in Australia. To do it as the locals do, grab your swimmers and head to the beach on Boxing Day. The big event, however, falls on New Year’s where Sydney hosts a massive fireworks event from the Sydney Harbour Bridge. As for cheap accommodation in Sydney, be sure to book early.

The weather in Australia is typically warm and dry, but being such a large country, one area can vary immensely from another. There are deserts, beaches, rainforests and mountains to take into consideration when traveling to Australia.

Sydney New Year’s Fireworks
Sydney is known for its killer fireworks display every New Year’s right off the Harbour Bridge. Locals will gather in the prime vantage points for hours in advance, counting down to the new year.

Festival of the Sun
The music festival takes place in Port Macquarie over two days and features a mix of Australian musicians. It is BYO and located just near the beach.

Oprah at the Sydney Opera House
Oprah will be recording a show in the land down under on December 14th at the “Sydney Oprah House”.

>> Read more about Oprah in Sydney