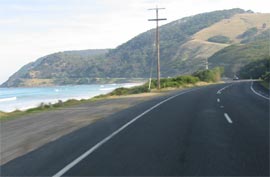 The Great Ocean Road has one of those names that sounds like it was recently dreamed up by some tourist board employee, but it actually dates back to the early 20th Century. It’s a 273-kilometer stretch of road that offers many stunning coastal views and passes some really worthwhile attractions and pleasant small towns. It can be driven as a day trip from Melbourne, but a far better idea is to take one full day driving the full coastal span, and then return to Melbourne through the also-scenic valley just to its north the following day.

The Great Ocean Road is part of the southern tip of Australia, located in the state of Victoria, with one end just a bit outside the Melbourne suburbs. Those leaving from Melbourne will head to Geelong, which is about 60 km southwest of the city, and from there the official road begins just to the south as it approaches Torquay. From there the Great Ocean Road slithers a bit more than 200 km along the coast until you reach Warrnambool. If you are going back to Melbourne you have the option of returning on the inland highway to Geelong, which is much faster since you can get up to higher speeds, and also extremely scenic in its own right. 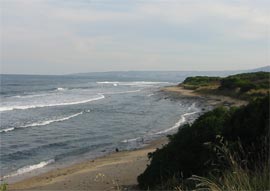 The Great Ocean Road is one lane in each direction for most of its distance, and most of it is fairly mild, although there are several very windy sections where it traces some jagged sections of the coast. In spite of its bold name, it’s not actually all on the coast, but the ocean is at least visible from most of it, and many sections are gorgeous stretches of highway that overlook cliffs or hidden beaches. It’s not really a challenging drive, but it can take a long time since the speed limits are low through the many small towns, and traffic can become a factor, especially during the December through February summer months.

Highlights of the Great Ocean Road 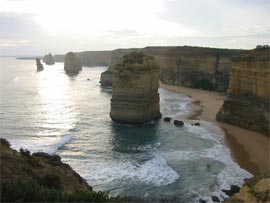 This stunning collection of 8 limestone stacks just off the shore is easily the most notable attraction along the GOR. They were called the “Sow and Piglets” until the 1950s, after which the name was changed to the Twelve Apostles, even though there were only 9 standing at the time. One crumbled on its own in 2005, so now there are 8, but this is still worth a stop. It’s free to visit, and there are large parking lots and a visitors’ center on the north side of the highway, and many great viewpoints along a cliff-top trail, which you reach by passing through a tunnel under the highway.

Cape Otway
On the southernmost tip of the Great Ocean Road is the lovely Cape Otway, which features a lighthouse dating back to 1848 that is surrounded by a very pleasant national park. This is also free and easy to visit from just off the GOR, and is an excellent place for a picnic if that fits into your schedule.

Bells Beach
This small beach surrounded by gorgeous cliffs is one of the best surfing beaches in Australia, and has held a prestigious competition every Easter since 1961. There are many small and remote beaches along the Great Ocean Road, but this is the best for surfing and surf culture.

Various small towns
There are no large cities along the GOR, but rather a collection of idyllic beach villages that thrive on tourism, yet aren’t overloaded with commercialism. Stopping for a snack or meal in one of the many small communities here can be as much of a highlight as the scenery itself.

The route stretches from Warrnambool in the west to Torquay in the east.