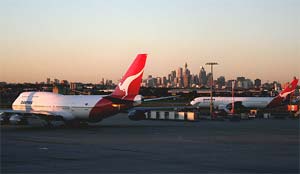 By far the busiest airport in all of Australia, the Sydney International Airport (code: SYD) is where most visitors to the country will first land. It’s officially known as Kingsford Smith International Airport, after Charles Edward Kingsford Smith, who was the first Australian to fly across the Pacific from the United States, but it’s more commonly just called Sydney Airport by locals.

Flights to Sydney Airport tend to be expensive from outside Australia, but at least you can reach the city from nearly every corner of the globe. There are nonstop flights available from within Asia, North America, and of course New Zealand, but with just one change of plane you can reach Sydney Airport from just about anywhere. If your ultimate destination is Melbourne you should check fares directly into that city. They are often a bit more expensive, but flights into Melbourne Airport directly are usually worth it anyway. International and direct flights to Brisbane are generally fewer in numbers, and many times involve a transfer in Sydney anyways.

You can fly on Qantas and several other airlines from many North American cities, but you’ll nearly always have to change planes in Los Angeles for the 15-hour flight to Sydney Airport. The good news is that prices tend to be only a little higher out of any other city than they are if you start in Los Angeles.

Qantas flies from London Heathrow and Frankfurt to Sydney International Airport, but you have to stop somewhere in Asia on the way. You’ll usually switch planes in Hong Kong, Bangkok, or Singapore, and this stop should be quite refreshing since the flight from London itself is over 12 hours and there are about 7 or 8 more hours until you get to Sydney. You can also get cheap airfares on some Middle Eastern airlines, which stop in the UAE.

You can reach Sydney International Airport nonstop from most large cities in Asia, but the largest ones usually offer the cheapest airfare. This means Hong Kong, Singapore, Bangkok, and Kuala Lumpur are the best bets if you are looking to reach Sydney by inventing your own connection. Flights from Bali and Jakarta are usually very reasonable, and particularly Bali because there is so much competition on that route.

Obviously Auckland is the major airport for connections to Sydney International Airport, but you can also fly in from Christchurch directly as well, so there’s usually no need to change islands to get to Australia, although in some cases the Auckland flights will be cheap enough to make that worthwhile anyway.

Don’t forget – you can book your cheap airfare to Sydney with our booking widget below.