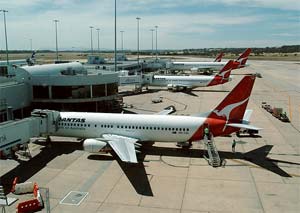 Australia’s second busiest airport, Melbourne Airport (code: MEL) has a full range of international flights, but not nearly as many as to Sydney, especially from more distant cities. You can often get cheap airfares into Melbourne Airport, but if the fare seems on the high side you should check into flights into Sydney International Airport and then consider flying on one of the cheap and frequent commuter flights between the two cities.

Melbourne Airport is also known locally as Tullamarine Airport, and simply as “Tulla”. There are 3 other smaller airports in Melbourne, so if you are flying from within the country it’s important to know which you are destined for because a couple of them are quite far out. If you are coming in internationally you’ll be flying into the main Melbourne Airport, so there’s really no chance of confusion.

Should you add Melbourne to your RTW trip?

Qantas, American, United, Air New Zealand, and Cathay Pacific all fly from North America to Melbourne, but don’t expect to find any low fares. There isn’t enough competition on this long-haul route so prices are often shockingly high. You can begin your flight from nearly any large city in North America, but you’ll almost certainly have to switch planes in Los Angeles (or sometimes San Francisco) for the 15-hour flight to Melbourne Airport. Fortunately prices from other North American cities are usually not much higher than from Los Angeles itself.

You can reach Melbourne Airport from major European cities with only one stop, and obviously from every other European city with just one extra stop. British Airways, Air France, and Lufthansa all fly into Melbourne Airport and they stop off in Hong Kong, Singapore, or occasionally Bangkok. Even if the flight were non-stop it would take over 20 hours so the one stop is usually welcome.

You can get a flight directly into Melbourne Airport from most major Asian cities, but the best prices tend to be from Hong Kong, Singapore, Bangkok, and Kuala Lumpur. You can also fly from Bali with frequent service since this is a major holiday destination for Australians. From other major Asian cities there are nonstop flights, but cheap airfare could be more difficult to get.

Auckland is the major hub in New Zealand and usually has the cheapest airfare into Melbourne Airport, but you can also fly in from Christchurch, Wellington, and Queenstown, although some services are seasonal.