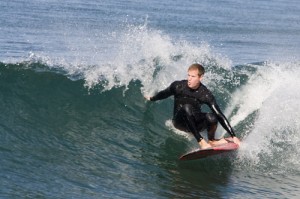 If you love Aussie slang, then you’ll probably find a bit of the surfie slang even more enjoyable. Remember how I talked about Aussie slang for beach terms just a couple weeks ago? Well, I was lucky to be given a kids magazine (K-Zone) from my boyfriend that had a page specifically dedicated to the world of surfie speak, and it was so good, I knew I had to share it all here.

Cooleoleol: Say it when your mate totally kills it on a wave.
“That was cooleoleol, dude!”

Garshed: Say it when you’re zonked after a massive day in the surf.
“Man I’m garshed!”

Hotdogger: Say it when your mate is showing off in the surf!
“Dude, you’re such a hotdogger!”

Rag-dolled: Say it when you take a massive dunking.
“That wave totally rag-dolled me!”

Juicy: Say it when the conditions are perfect for wave-catching!
“The surf is so juicy today!”

Noodled: Say it when you’re exhausted from paddling tot he surf.
“My arms are fully noodled.”

Tubed: Say it when you surfed inside the tunnel of a wave.
“I got tubed!”

Trunkin’: Say it when you see a guy surfing in really cold water without a wetsuit.
“Man, he is trunkin’ it today!”

In addition to these phrase, the article points out some questions and answers with surfer Mark Visser. During the QnA, we learn that “claimsy” is a big word on the surf scene right now, and it refers to people who do a bit of bragging. Also, adding in “sick” and “all time” to your lingo can get you sounding more surfie than ever.

Thanks, K-Zone, for preparing this awesome slang lesson!