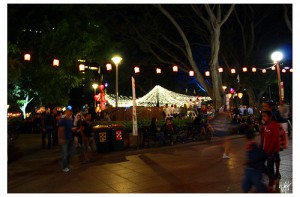 Australia in October is one of my favorite times of year; everyone is getting used to the warmer weather and having more barbecues! October is middle of spring, and that means that all of those flowers are still blooming, and the temperatures are starting to heat up. The cities are not yet overflowing with tourists (beware of November), and planning trips solely for camping and not completely freezing at night can now happen in the south. If you’re up in the north, you are probably starting to feel the humidity picking up, but it’s still a great time to head to Cairns and explore.

Since this country is so huge, the weather in Australia can vary greatly depending on where you want to travel. Be sure to keep in mind your intended destination when packing as Darwin will be terribly hot, while people may possibly be skiing in the Snowy Mountains.

Floriade
Floriade starts in Canberra in mid-September is still running through mid-October. Walk around and enjoy the beautiful flower displays in the country’s capital city!

>> Read more about the Floriade Festival in Canberra

>> Read more about the Queen’s Birthday

Labor Day
Labour Day is celebrated on the first Monday of October in ACT, NSW and SA.

The Crave Sydney International Food Festival
October 1st marks the first day of a month-long festival featuring over 600 food events in some of Sydney’s best, favorite and unusual locations.