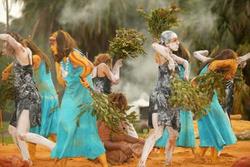 For many Aboriginal Australians, the concept of Australia day is a tricky one. The day the British landed and basically wiped out their culture, took their land and continued to commit atrocities against them for ages, doesn’t exactly raise feelings of civic pride. Called “Invasion Day” or occasionally Survival Day, the Aboriginal Community has created a ceremony called Woggan-ma-gule
Each Australia Day in Sydney begins with the Woggan ma gule Morning Ceremony. Performed in the Royal Botanic Gardens, sacred land of the indigenous Gadigal people, the ceremony honours the past and celebrates the future.
Woggan-ma-gule is meant to voice all people’s dreams. Bringing to life a sense of community through celebration, the traditional ceremony entertains, engages and challenges us to think about what Australia Day means to all of us – personally, socially and culturally.
You can experience song and dance performances along with the warmth of a traditional smoking ritual.
Woggan-ma-gule