It’s an Akubra, Not a Cowboy Hat 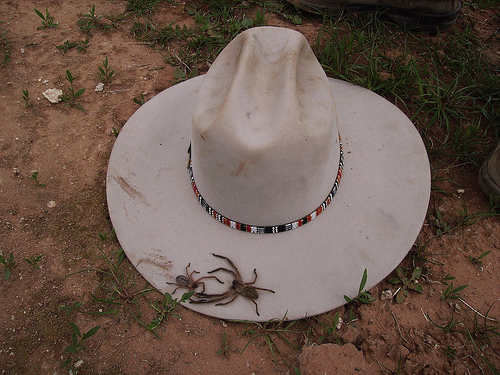 The Akubra is an iconic piece of rural Aussie gear. With its wide brim, these hats are especially important for those working in the bush and the outback to protect their heads, necks and ears against the harsh elements. Besides protection, the hat was used as a tool: a way to carry items, fan a fire or give dogs a quick drink.

I made the mistake of calling them cowboy hats to an Australian fellow I met abroad, and he let me know these are not “cowboy hats” like in America. They are distinctly different.

Hmm… well, to avoid an argument at the time, as he was quite adamant on the subject, I just let it go. Now, I can see the difference in the wider brim and rabbit fur felt material. The drawstring to go around the face to keep it from flying off in the wind is yet another difference.

The Akubra dates back to the late 1800s, but it wasn’t until 1925 that the Akubra name started to be used as a brand name. Today, the brand name generally refers to any hats of this style (think about the term “kleenex” in the USA). However, there is an Akubra brand of hat that is of the official company.

Did you know that “akubra” is the Aboriginal word for head covering?

In the film, Australia, Hugh Jackman sports an Akubra hat, and you can read more about the specific type on the Akubra site. Obviously, having Hugh Jackman in one of the hats did good things for the Akubra company.

Today, there are several styles, colors and sizes to the hats produced as Akubra hats these days, all helping to keep those bush men and women protected and cool in the harsh Australian climate.

Akubras make for great souvenirs and gifts for the Australian fan, especially around Christmas time!