Warning: The images in this post might frighten you, but it is always good to know what you may encounter on your Aussie adventures. Don’t let this influence your decision to catch a flight to Australia! 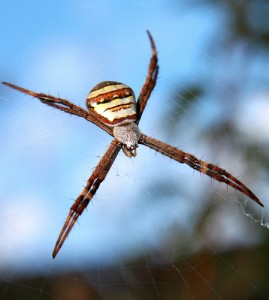 When it comes to gigantic, monster spiders in Australia, there are a few that I can handle better than others. One is the St. Andrew’s Cross spider that heavily populates all the bushes in my Sydney suburb, and probably the suburbs of all major cities around the country. They are not small or discreet; they stand out in bright daylight along my walk to the train station. But, I have to give it to them because for the most part, they keep to themselves.

In the daytime, I don’t have to worry about finding these guys on the car or climbing in my windows since they pretty much find a spot in the bushes and stay there. Their webs are typically so gigantic that they aren’t the hidden ghost webs you would just happen to walk through.

Even though spiders are the worst fear on my creepy-crawlies list, these ones sort of intrigue me to the point where I actually stop to check them out. I love the colors of these spiders, but what gets me most are the architectural works of art they call their webs. Seriously, I will have to stop and photograph these webs for a future post because they will be an intersecting masterpiece of three-dimensional design with support beams that reach meters from the main web to a house nearby or in between trees. It’s impressive work.

A good thing to note is that these spiders are not the poisonous kind. 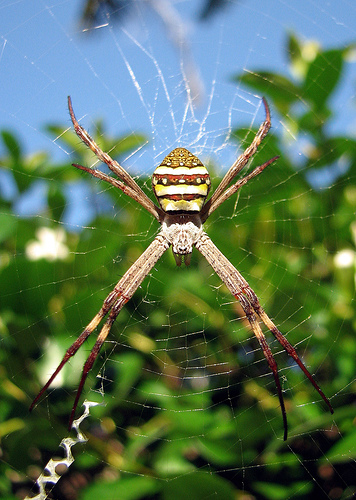 In the nighttime, however, I am not a fan of these guys. Since their webs can reach from meters away, you can easily run right through the ultra-tough and sticky strings that may be crossing your path.