Where I come from back in America, we have cute little birds that don’t do much besides the typical cheep-cheep singing that you might picture in Snow White. They aren’t very big, and you probably won’t have any issues with them unless you happen to park your car underneath the wrong tree.

Australia’s birds, on the other hand, are a very underrated part of the animal world that will most likely shock and amaze travelers. I know I was a bit shocked when I came to Oz to find the most beautiful birds just roaming free; the type of birds we would only see in a zoo. But, it wasn’t just their beauty that caught my attention. No, here in Australia the birds are right out of a horror film as they come in monster sizes compared to our little guys back in Illinois.

Here is a run-down of some of the birds you might encounter in New South Wales, and what to expect if you do. 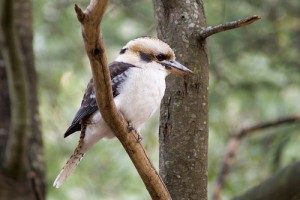 I’m always reminded of that little nursery rhyme when I think of a Kookaburra. You know how it goes:

“Kookaburra sits on the old gum tree. Merry, merry king of the bush is he. Laugh, kookaburra, laugh kookaburra… Gay your life must be.”

It’s been a long time waiting, but to come to Oz and find out that the Kookaburras really do sound like they’re laughing was an awesome discovery, even if they do sound like they are doing it sadistically. The joint laughter of an entire flock can fill the air, but it isn’t the noise that makes these birds interesting. It is their sometimes gigantic size!

Reaching anywhere from 11 to 17 inches tall, these terrestrial kingfishers are more like cats with wings, and they have an eerie tendency of just sitting around and watching your every move. Their beaks alone look fierce enough considering their size, but the way they are prone to swooping down and jabbing them into the ground for food, perhaps right next to if you are relaxing in the grass, is frightening. Or, even better is when they fly right over and steal the steak right off the grill! 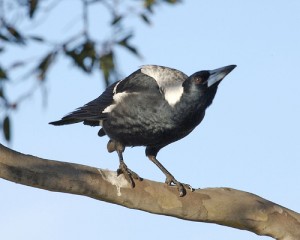 Magpies are also quite large in size, reaching 14 to 17 inches. If you’re in Australia, you will know this bird because it is black and white, and it has the most beautiful and unique song that almost sounds like R2D2 at times.

As beautiful as they sound, Magpies have a darker side. In the spring, they are known for swooping – at your head, at a rabbit or a cat. They will sit quietly on the top of a lamp post until the moment is right and make their move. Just look at this video of a poor mailman trying to make his rounds while getting pestered by a swooping magpie. 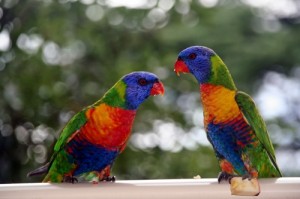 Lorikeets are like little parakeets, and I love looking at their colorful bodies filling the trees in my backyard. They do have a tendency to get a bit on the noisy side, as mentioned in a post by Megan and Stefan, two American expats living in Sydney. However, I will let it slide with them because I just find them adorable.

When I have some fruit that is getting a bit on the old side, I will put it out on the balcony and watch them flock. They really have a soft spot for apples I have found, but bananas… not a peep. 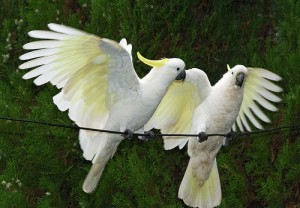 An easy way to explain the presence of the cockatoo in New South Wales is to relate it to this story which is all too common in America when people take them as pets. My aunt was one of those people that just had to give it away after a short period of ownership. The reason? It was TOO LOUD!

Cockatoos are gorgeous birds, especially the white ones with the little bit of yellow on their heads. However, I can’t get past how annoyingly loud they are. An Aussie friend of mine was telling me how much he hated the bird when I first arrived because he would wake up to a dozen of them on his balcony. My initial response was that I wished I could see them all! He gave me a look of total disgust and told me to wait and see.

I saw. A dozen of these birds outside your window early in the morning is worse than the recycling truck coming along and dropping an entire garbage can of glass bottles into its bin at 6am. The birds are the most annoying things I have ever come across in my life. 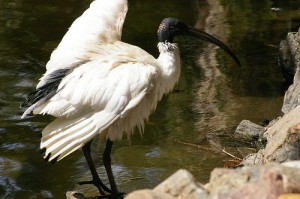 To see an animal with a beak long enough to spear a person all the way through just wandering around Sydney is a little frightening. Having said that, however, I’ve never actually seen any of these Australian White Ibises causing trouble. They’re usually just walking around minding their own business.

I never knew how smart they were, though, until my recent trip to the Gold Coast, where they also like to hang out. Apparently, they are law-abiding citizens as I not only caught this bird following one crosswalk, but two in perfect form! 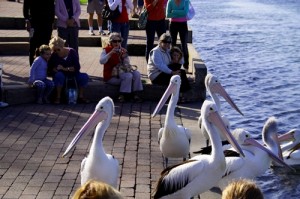 Seeing how Australia is one big coastline, pelicans are a prominent species. The Entrance is a small town where my boyfriend likes to fish, but it is also known as the pelican capital of New South Wales. Being a fisherman, he has absolutely grown to loathe these guys because they just hang around waiting for you to catch something that they can then fly up and steal.

Did I mention that these birds are huge? As you can tell in the photo, they are the size of a child, and if you look at the video below, you will notice that they aren’t always docile.