Where in the Bloody Hell Are You? Bindi to Replace Bingle! 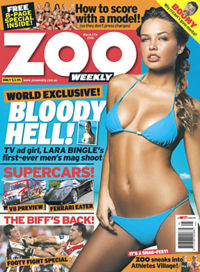 Sorry Boys, but I think this one is true! Little Bindi Irwin is to be named the new face of Australian Tourism. The 8 year old daughter of the Late Crocodile Hunter, Steve Irwin, is currently touring the US like a rock star.
But what does this mean for the much loved and much Google searched Lara Bingle? The officials aren’t saying for sure, but the controversial bikini clad model will at least have to share her spot light. The new campaign is said to utilize more everyday Australians.
Bingle – who shot to prominence as the face of the “Where the Bloody Hell Are You” campaign – will alledgedly play a downgraded role in future campaigns, although Tourism Australia denied she had been dumped altogether. I’m sure many of you boys read this with a heavy heart. Don’t worry, I’m sure Ms. Bingle will find a new form of exposure.