Know Before You Go: 29 Abandoned Uranium Mines to be Incorporated into Kakadu! 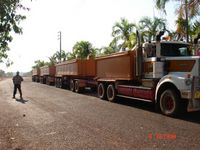 Kakadu National Park is a major destination and highlight for many travellers to Australia. One of the issues surrounding the park that travellers should be aware of is Uranium Mining. From the road trains to the environmental impact, the mines are a major part of the Northern Territory and it’s tourism.

The locals are as divided about the issue of mining as the rest of the world. If you do have the good fortune to sit and chat with a Fair Dinkum Territorian, I’m sure you’ll hear their view point. While it is always fine to have discussions about highly political issues, please be respectful. Remember- the people you meet- live there and are affected by the industry everyday of their lives.

Whatever your personal/political opinion on Uranium mining, the environment and indigenous people have just scored a win. Recently an agreement has been made to extend KAKADU National Park by a further 466 hectares with the incorporation of 29 EXPIRED mining leases into the World Heritage Area.

The name ‘Kakadu‘ comes from an Aboriginal floodplain language called Kakadu or Gaagudju
Uranium ore was found in Kakadu in 1969, and in 1980 the Ranger Uranium Mine was completed. From the very start it was shrouded in controversy, with local Aboriginal groups protesting.

Regardless, a new agreement has now been reached with the leaseholders, enabling the expired leases to be incorporated into Kakadu and rehabilitated to a standard benefiting the park’s World Heritage Status. The move will ensure the effective rehabilitation of abandoned uranium sites in Kakadu’s Alligator River valley with the Government spending more than $7 Million, according to federal parliamentary secretary Greg Hunt.