Getting to Perth from Melbourne 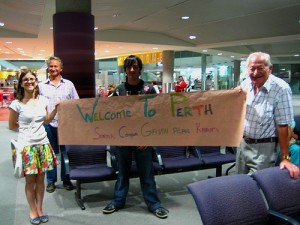 Still, there is a great expanse of land between Melbourne and Perth – 3400 kilometers of it to be more exact. It’s not a quick hop by any way except for plane, but you can easily book a cheap flight to Perth here on this site (and it is recommended for those hard pressed for time).

Getting to Perth from Melbourne by Plane

The in-flight journey from Melbourne to Perth runs in the 3.75 hours range, which is not bad at all. You’ll enjoy making it to Western Australia, which is a state that plays home to some of the most beautiful landscapes, beaches and overall scenery in all of Australia. Flying to Perth can be done on Qantas, Jetstar and Virgin Blue. While you’re here, be sure to check for fares using the search buttons below!

Quick search for fares to Perth (PER) from Melbourne (MEL), Sydney (SYD) and Brisbane (BNE):

Getting to Perth from Melbourne by Train

I highly recommend train travel in order to cross the country. There is no other experience that provides the comfort and the views when crossing Australia than by train (you don’t have to worry about driver’s fatigue for one!). Unfortunately, there is no direct train from Melbourne to Perth like there is from Sydney to Perth.

What I recommend is catching The Overland train, run by Great Southern Rail, which connects Melbourne and Adelaide (see about getting between Adelaide and Melbourne). The Overland train completes the journey in about 10 hours. From there, you can catch the Indian Pacific train from Adelaide to Perth, which will run you about 2 days. While this might seem like an awful long trek, you have so many creature comforts on board the train – showers, food carriages, etc. – that you will almost feel as if you’re in a hotel on wheels.

Getting to Perth from Melbourne by Car

Just like getting from Sydney to Perth by car, going from Melbourne to Perth will require a bit of time and a bit of determination. Individuals starting out in Melbourne will proceed west-ward usually along the Great Ocean Road and further onto Adelaide. After Adelaide, drivers will continue onto the Great National Highway A1, which takes you near the Great Australian Bight and the Nullarbor Plain, and further onto the Great Eastern Highway towards Perth.

Driving to Perth is no easy feat, so it is advised to take regular breaks and check your car’s gas and fluid levels periodically. Here are some tips for those driving across the Nullarbor, and also some of the best things to do and see along the Nullarbor. For inspiration, I suggest having a look at the following video of a trip from Melbourne to Perth by car:

Getting to Perth from Melbourne by Bus

You can take the bus all the way from Melbourne to Perth, but I wouldn’t recommend it over the other types of transport unless a) you definitely do not want to fly, b) you feel the long-distance trains in Australia are too budget-busting, and c) you refuse to drive, or just don’t have a license. Otherwise, the bus is another way to make it across the country that will make a lovely option.

You won’t be able to take a Greyhound across. However, their route map shows a gap filled in by using the service of their partners. If you choose a bus, I’d recommend a bus tour. You can search for bus tours on the Australian tours page for more information.