Getting To & Around the Gold Coast 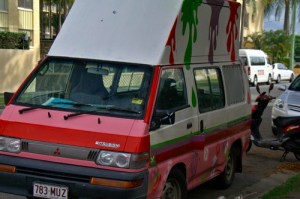 Getting There By Air

Plenty of budget airlines fly into the Gold Coast including Jet Star, Tiger Airways and Virgin Blue. The flight from Sydney, for example, is fairly quick at only an hour, and it’s only another 25 minutes to reach Surfers Paradise from there by local bus (see bottom).

The Gold Coast Airport is located to the south of the Gold Coast nearer to Coolangatta. If flying in on Tiger Airways, please note that you will arrive and depart in a separate building to all other airlines.

>> Book your cheap flight to the Gold Coast

Getting There By Car

If you want to take the scenic route and head along the coast, driving is a wonderful option for those with more time to spare.

For the truly long journeys, renting a campervan is one of the more enjoyable trips since it allows for nightly stop-offs at some beautiful locations up or down the coast. If coming from Sydney, the route can contain stops at Newcastle, Port Macquarie, Coffs Harbour and Byron Bay. Remember to practice safe driving habits, and be sure to check out the driver revivers along the way!

Getting There By Coach/Bus

Fancy catching a Greyhound or similar to get to the Gold Coast? Plenty of services are available from all major cities along the way, including Sydney, Brisbane, Byron Bay and Melbourne. Just be warned that the trip isn’t short, especially if coming from Sydney, which can take in the 14 hour range.

Getting There By Train

Interestingly enough, Queensland railways and New South Wales railways use a different sized track, meaning you can’t actually take a direct train from Sydney or Melbourne up to the Gold Coast. The line will stop in the Murwillumbah area.

If coming from the north, you will be happy to know that Brisbane’s Central and Roma Street stations will offer train services to Helensvale, Nerang and Robina stations – the three that are closest to servicing the Gold Coast. It is easy to catch a bus from any of these locations to your desired destination in the Gold Coast.

Getting Around the Gold Coast

There’s generally a lot of walking involved on a Gold Coast trip, but an easy alternative is to get an unlimited bus pass, especially if you plan to check out some of the great theme parks in the area.

Surfside bus lines offers 3, 5, 7 and 10 day passes, which can also include an airport transfer both ways if desired. The prices may seem a bit on the steep side ($67 for a 3-day pass including airport transfers), but it is unlimited use of the 24 hour buses, as well as transfers to the theme parks in the area. Visit site >>

If all else fails, numerous taxis fill the streets. It is a heavy tourist location after all.