Getting Around in Sydney

One of the things you should know about Sydney is the fact that it is a city not built up, but built out. I noticed it during my first week in the city from the top of the Sydney tower; the buildings below didn’t really get that tall. Instead, I was met with miles and miles of suburbs stretching into the distance.

Because Sydney is so spread out, there is pretty much no getting around having to use public transport. Luckily, Sydney has a little bit of everything – buses, trains, trams and taxis. 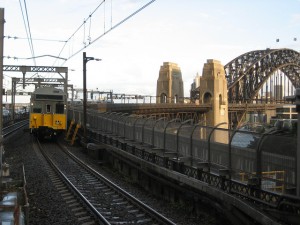 CityRail offers train lines that can get you to most parts of the city. There are some pesky inner-west and eastern suburbs that can only be accessed via bus, but the trains are usually quite efficient for getting you in the vicinity.

Airport Link can get you from Central Station to the Sydney International Airport along the Airport & East Hills Line. This is a fairly expensive route to take by train, coming in at $15 one way.

Central Station is a hub for all other lines, so it is always a good idea to stay somewhere in the vicinity if you think you’ll be exploring Sydney to its fullest. In terms of cost, a typical fare might be $3.20 one way (Central to Bondi Junction, for example), but buying return tickets and travelling off-peak hours can give you a little bit of savings ($5.40 round-trip instead of $6.40).

You can check routes and train schedules via the CityRail website. You can pick your start and end location and get times, as well as stations, platforms and trains you will need to take. 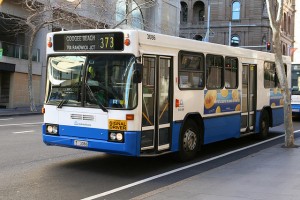 Buses are your second option for getting around Sydney. For some of those pesky inner-west and eastern suburbs, it is sometimes easier to just take a bus all the way there instead of riding to the nearest train line and then changing. So, if you want to get to Bondi Beach from city, you can either take a train to Bondi Junction before switching to a train, or you can find a bus that goes all the to Bondi Beach from Central.

For prices, timetables and ticketing, refer to the Sydney Buses website.

There are a number of buses in Sydney now that do not accept tickets to be bought when you get on. In these cases, you will need to purchase a ticket from a news agency. Tickets are priced on a section basis. A MyBus1 is good for up to 2 sections, a MyBus2 is good up to 5 sections and a MyBus3 is good for 6 or more sections. There are also travel 10 passes that can save you a bit of money.

A good thing to note about bus travel in Sydney is that you must flag down a bus driver in order to get them to stop where they might not be letting people off. Another important tip is to practice patience. Being the laid-back country that it is, buses are often late or off-schedule. Traffic throughout Sydney city can often be to blame. 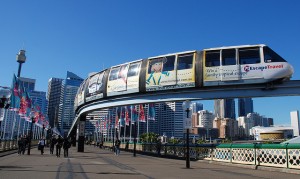 There is an interesting way to get around Sydney’s prime shopping and entertainment sectors — by monorail. The monorail offers a unique ride through downtown Sydney, weaving around buildings and shops above the streets.

A single ride will cost you around $4.90, but a day pass will only cost you $9.50. The monorail only runs until 10pm, but is open every day except for Christmas. Learn more on the official monorail website. 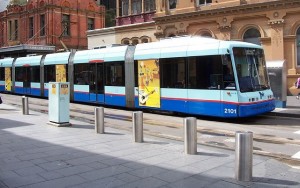 Light Rail travel is a simple tram network that takes travelers from Central to Star City and on to Lilyfield. If you’re looking to get the fish markets or Chinatown, this could also be the method of travel for you.

There are two zones of travel for the light rail, and pricing will vary depending on which zone your destination falls into. Trains come every 15 minutes during the day and every 30 minutes during the night. Zone 2 travel to Lilyfield does not operate 24 hours. Read more on the official light rail website. 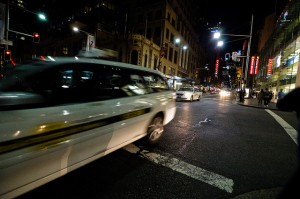 Taxis are readily available throughout the city. You can easily flag a taxi down at just about any hour of the day, but expect to drop a few dollars by doing so. A ride from the airport to the center will run you at least $30.

On the other hand, you can rent a car in Australia and drive it through Sydney, although I wouldn’t recommend it if you’re not happy driving through traffic. A point to keep in mind about driving through Sydney is the use of toll roads. To pay for your toll road passage (there is usually not a person to pay at the time), you will have to log on to the web within 2 days to complete the process.