Cheap Flights from Sydney to Singapore 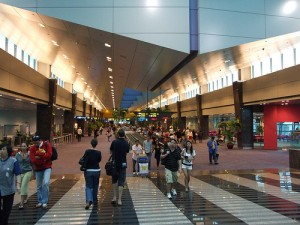 Heading to Australia opens up the perfect opportunity for jetting over to Southeast Asia. Especially for North Americans and Europeans who have already taken the time to get to the South Pacific, a stop in Asia is really only a quick jump. So how can you go about getting from one major city in each – namely Sydney to Singapore – cheaply?

Well, you can grab a cheap flight on one of these options:

Tiger Airways: Using Tiger Airways to get from Sydney to Singapore is a very long and drawn-out process. Singapore is only connected to Australia on this airline via Perth, and Perth only flies to Melbourne. There would need to be another flight in that mix, so this would not be a suggested path unless you are planning to spend time in each stopover.

Malaysian Airlines: Malaysian Airlines offers flights to Singapore via a stopover in Kuala Lumpur. It’s usually not the most budget option out there (you can generally get a cheaper price through Jetstar), but it is another option for you to choose from.

A direct flight will run in the 8 hour range from Sydney to Singapore, but those will not include any sort of stopover as mentioned with the budget airlines above. If you’re interested in searching out cheap flight options, including direct options, you can easily use the widget below.