Sydney Opera House and how to visit 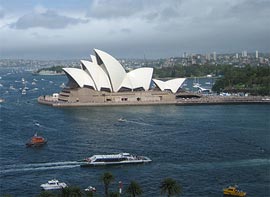 One of the world’s most recognizable and iconic buildings, the Sydney Opera House is still a bit of a mystery to most visitors until they do a bit of research. Completed in 1973 and designed by Danish architect Jørn Utzon, the opera house has a couple of key common misconceptions by foreign travelers.

First off, the domed semi-ceilings designed to look like sails in the harbour are actually atop three separate buildings that don’t touch each other. From most angles it looks like one big and amazing structure, but when you get there you’ll see that it’s more complex than it even looks. Secondly, in addition to being an opera venue, the Sydney Opera House actually contains 6 smaller venues as well as the large concert hall, so many things are often happening here at once, and very few of those involve opera.

The larger venues inside the complex

The Concert Hall
The largest venue here seats almost 2,700 people, and is home to the Sydney Symphony as well as big name pop, rock, and jazz artists throughout the year.

The Opera Theater
The other large space inside the complex is home to the Opera Australia as well as the Australian Ballet, so this is where you’d go if you actually wanted to see an opera here.

The Drama Theater
With just over 500 seats, this is used for smaller theater productions and dance companies, and other acts not able to fill the larger venues.

Finding out who is performing and buying tickets

Unlike most concert halls and other large venues, the Sydney Opera House actually has a really helpful and nicely designed page that will tell you what the upcoming events are. It shows you everything scheduled for today on the main page, and the days of the upcoming week can also be selected on the menu on the top of the page. You can also search a range of dates on the left side, so check out the official Sydney Opera House What’s On page for the latest information.

Tours of the Sydney Opera House

Since the place is right near the city center, it’s very easy to just walk up to it and see the glorious outside of the structure. Most bus tours of Sydney will also drive right up and let passengers out for a short time to admire the curves and take photos, but if you’ve got a bit more time you can take an official tour of the complex.

The Essential Tour
The main tour leaves every 30 minutes and goes for 1 hour. It gives you the story of the facility and guides you through the most important parts and all the main venues. The cost is AU$35, although you can save 25% if you book online on the official tour site.

The Backstage Tour
Groups of up to 8 can witness the backstage goings on as they prepare for a performance. The tour begins most days at 7am, and costs AU$150 per person.

The Sydney Opera House overlooks Sydney Harbour on a small peninsula, just steps from the Circular Quay terminal, which is where most of Sydney’s commuter ferries come and go. It’s very close to the Central Business District, and very easy to reach on foot from most central hotels, and even a reasonable walk from the notorious Kings Cross neighborhood where most backpackers stay.