Sydney Animal Parks: In Search of Native Wildlife in the City 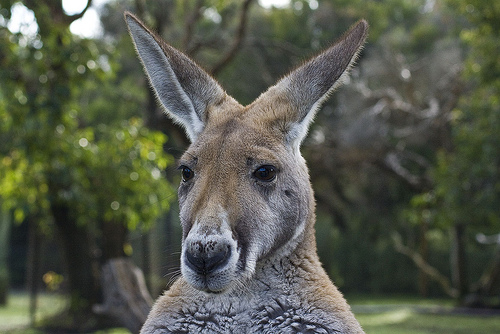 Australia has a number of features that make it a unique place to visit, and of course, you’ll want to see them all. However, that’s not always possible given your holiday time or your reason for visiting in the first place. Perhaps you have business in Sydney, but not enough time to get up to Queensland. Maybe you had just a short stopover on your way back to your home country. Either way, you might just end up seeing Sydney city… and not much else.

That’s not necessarily a bad thing, though. Sydney is one of my favorite places in the world, and it is a place I now call home. Still, you might be wondering how you’re going to get around to seeing other amazing features of Australia when “stuck” in the big city.

The Taronga Zoo is a delightful place to spend the day while traveling to Sydney. Set just across the Sydney Harbour in the small suburb of Mosman, you will quickly realize that the animals that are kept here have one of the best views of the city! When it comes to this zoo, getting there is half the fun. I suggest a ferry from Sydney’s Circular Quay (takes about 15 minutes) because you get both a boat ride (hopefully in awesome weather) as well as a really cool entrance to this lovely zoo. You can even purchase combo transport and entrance tickets that include the ferry ride, zoo ticket and Sky Safari when making your initial purchase at the ferry terminal.

The Taronga Zoo is home to hundreds of native species of Australian wildlife – everything from kangaroos, koalas and wallabies to snakes and other creepy crawlies.

Sydney Wildlife World is located right on Darling Harbour, so it is a bit closer to those in the city to get to. Wildlife World is like a smaller version of the zoo, but it has a good selection of the native Australian animals, especially the crocs. It is here that you can see Rex, a giant 5 meter crocodile brought down from the Kakadu to his new home in Sydney. Do you want to hold a koala or feed a kangaroo? Those are also very accessible in this animal haven in Sydney.

The Sydney Aquarium is located right next door to the Wildlife World over in Sydney’s Darling Harbour, and special discount passes are often sold if you wish to visit both during your stay… which you should. Aquariums in general are pretty amazing, but I remember being wow-ed by the neon glowing Great Barrier Reef coral and fish exhibit. In addition to this, you can get a viewing of what lies out in the deep blue (uhm sharks, sting rays, jelly fish, dugongs, sea turtles and more) in a number of displays.

The Australian Reptile Park may be about an hour north of Sydney city, but it is still accessible in a day trip, and it is also worth it. If you like koalas, tassie devils, getting hands-on with animals that are safe to get hands-on with, then you’ll like your visit to the Reptile Park. If you like to get creeped out, then Spider World is the exhibit that teaches you the ins and outs of spiders, both those around the world and famous locals.

Nestled in the bush of Pennant Hills, a Sydney suburb, the Koala Park Sanctuary provides the perfect backdrop for your first cuddle a koala experience. The park opened in the 1930s as a place to protect the little guys from being shot for their furs. It became a place where they could live naturally and thrive. Today there are koalas, along with wombats, dingos, emus, peacocks, Australian birds and more to experience up close, making it a great day-trip option for those looking to experience the native wildlife of Australia while in Sydney.

Oceanworld Manly is named so because it is located up in Manly, another Sydney suburb up in the Northern Beaches. Don’t discount Oceanworld because it feels too far away: you can catch a 30 minute ferry from Circular Quay to get there. That said, Oceanworld is much like an aquarium that offers a bit more up-close and personal experiences. Oh, you know, like shark diving or snorkeling the reef experiences. Yes, Oceanworld has its place on the list of things to do when in Sydney that would help to somewhat transport you to other parts of this great country where more amazing native wildlife would roam.


The Featherdale Wildlife Park is another big one in the Sydney area that you can get to in under an hour. Have you been before?