Exclusive clubs in Sydney: Where to go and how to get in for free 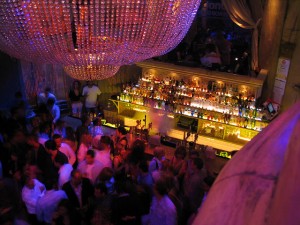 Clubbing would not be high on the list of ways to save money on drinking in Sydney, but it is for sure one way to have a memorable time in this great city. Luckily, Tara Sena-Becker from HostelBookers lays out some of the most exclusive clubs – and how you can possibly get in for free – in the following guest post.

From secret passwords to five-digit member fees, hidden staircases and underground passageways, it’s just another part of the game on Sydney’s exclusive club scene. And just when you thought bars couldn’t be any harder to get in to…

Problem is, not all of us can afford to fork out a sweet $10,000 membership fee.

Luckily, for all you budgeting backpackers out there, we’ve put together a list of the most secret clubs on the Sydney party circuit…and all the hot tips for getting in without shelling (or selling) out. Who’s up for the challenge?

Hidden at the end of a dingy back alley in Kings Cross, the exterior of super-exclusive Shh! Bar features only a seedy red light, a bolted door and an intercom. Haven’t got an SMS telling you the nightly secret password? Then we suggest you go elsewhere…or, more specifically, to the nearby Café Roma for dinner. This mouth-watering Italian pizza restaurant doubles as a hunting ground where undercover Shh! promoters keep an eye out for potential patrons. Don’t be surprised if someone leans over and writes a number on your placemat. That’s your secret passcode folks. You’re in.

While it’s not a members club, Tatlers has got to be one of the hardest establishments to get into in Sydney. We’ll put it out there: if you’re under 25 (or, more specifically, look under 25), forget about it. This club isn’t open to the public, and you will find that everything, from guest lists to parties and nightly events, is done by word of mouth. Your best bet here, if you aren’t familiar with the door staff or personally on the invitation list, is to know the name of someone who is. Of course, you could always buzz for entry and try your luck…but, unless you’re a six-foot Glamazon clad in Prada and Choos, we don’t love your chances…

Oh, the good old Ivy Pool Club! Since opening its doors in 2009, this place has become the ultimate Sydney institution. And hey, considering it plays home to a 25m pool, we can’t say we’re too surprised. While it purports to be a ‘members only’ club, it isn’t too hard to convince the Ivy Pool door staff to let you past so long as you come in a small group (of preferably girls) and are dressed up to the nines (that’s suits for boys and a classic dress with sky-high heels for the ladies). It also pays to know someone who works in one of the nearby designer stalls (think Sass & Bide, Ginger & Smart or Peter Alexander) – you’ll find the young door staff always willing to help each other out…

Axl Rose has sung there, Paris Hilton spent New Year’s there, and Mick Jagger officially opened the room. What can we say? De Nom, located above Ruby Rabbit on Oxford St, has certainly got their celeb factor covered. Modelled on the silky ceiling and red-gold designs of the Palace of Versailles, this venue is available to members for a cool $10,000 a year. Umm…is that meant to be a bargain? For those who can’t quite afford the five-figure sum, we’d say you still have a fairly good chance of getting in provided you dress nicely, don’t give the bouncers any lip and act like you’re meant to be there (for goodness sake, avoid giggling or pointing at the bartenders in bow ties at all costs).