A Day at the SCG: Sydney Cricket Grounds

Since I wouldn’t really consider myself a sports buff, I haven’t really talked much about sports here on WhyGo Australia. To remedy this issue — since Australian’s love footy and cricket — I’ve recruited my pal, Tony of It’s Good Overseas, to give us all a run-down on a day at the cricket here in Sydney. It’s a rather informative and amusing read, so enjoy!

The 2011 Cricket World Cup kicked off on the subcontinent (Bangladesh, India and Sri Lanka) on Sunday night for what’s set to be another great tournament of one of the world’s much-loved sports. Whether you’re a cricketing superpower like Australia, or a small team on the up like Canada, everyone has their chance to shine on the world stage.

Australia started its world cup defense, and quest for a fourth straight title, on Monday night with a 91 run win over Zimbabwe in Ahmedabad (India), but how will they go this year? Does Australia still have the cricketing muscle to shake off the likes of India, South Africa and Sri Lanka?

Following the biannual Ashes Test Series, I recently went to a One Day International (ODI) between Australia and England at the Sydney Cricket Ground (SCG) to get a punter’s view of the Australian cricketing experience.

The SCG is located at Moore Park which is easily reached by car or bus. However, if you’re on a budget, or want an adrenaline rush,, you can potentially get there for free.

Many punters travel by bus from Eddy Avenue at Central Station and tend to pack out the regular local buses.

Tip: If you get into a stream of people piling onto a bus, the bus driver will largely wave everyone on without checking tickets. However, the ride is only 10 minutes so it will be a short adrenaline rush.

If you’ve never been to the SCG you will be impressed. It is a large oval with a very pretty member’s pavilion you’ll wish you were sitting in. But before you get inside, you’ll be greeted by one of many statues, including former Sydney Swans coach Paul Roos along with a team of scary looking security guards.

I don’t know about you, but whenever I come across security guards they tend to be hugely built guys who don’t give a damn about you. But down at the SCG, appearances can be deceiving.

Meet Lolasa. A scary looking security guard at the SCG you probably wouldn’t introduce to your Nanna as a friend.

While waiting for a mate to arrive, I noticed him pacing up and down. I assumed he was keeping watch to make sure no one tried to jump the gates. But after a few minutes he approached his supervisor and said “Mate, I’m busting for the toilet. Can I go now?” Lucky for him, his supervisor said yes but in true hardcore security guard style, he said he’d hold it and continued to pace up and down.

Don’t be afraid of security guards. They are just desperate for the toilet.

Tip: You can take your own food and drink to the SCG, but cans and glass are not allowed in the venue. I got lucky only having to throw away one can of cola but the guy in front of me had to pour out four cans of a popular energy drink. Expensive.

Unfortunately, going to the cricket isn’t cheap unless you have a friend who can get free corporate box tickets. My mate Chris scored one of these this year and I hate him.

For everyone else, you’re looking at about $80 to see popular opposition such as England, perhaps less for say, Zimbabwe.

What view does an $80 ticket get you at an Australia Vs England ODI? Not a great one sometimes. If you’re unlucky like me, you’re in for a cracking view of the roof.

Bringing your own supplies is always a winner but you’d be depriving yourself of some amusement.

Food options are quite standard for a sports venue. You can choose from chicken, fish, hot chips and the almost compulsory hot pie.

Being a traveller you’ll know that while most countries give you free condiments, there are some that do not. Australia is one such country and locals are wise to it.

Picture this: You queue for 15 minutes, reach the food attendant and find out sauce is 50 cents. You could argue. You could pay it. Or you could do the following.

I was patiently queuing for a hot pie and chips when I noticed some curious goings on in front of me. A punter had ordered chicken and chips and when the attendant walked away he glanced up, made a hand swipe for the mayonnaise and swiftly pocketed it. Somehow, no one noticed.

When she came back he said he forgot to order a cola so off she went again. This time it was difficult: The tomato sauce container was facing away. Undeterred, he made an elephant trunk grab for some squeeze-on tomato sauce and stowed them in his pocket. The attendant on the other checkout did see him this time but chose to smirk rather than hunt for his meat, bones, and tusks.

The SCG is fairly unique in that it responsibly serves mid-strength beer to keep a lid on drunken clientele that attend cricket matches. 1-0 to the SCG.

As a punter you shouldn’t be downbeat about this. There is something more exciting to get involved in than the Mexican Wave.

All you need to do is hang out in a big group, collect a large number of empty beer cups and stack them together to create a beer snake. It dates back to 2001 at the SCG when the Sydney Morning Herald penned an article on this social phenomenon. Apparently, security hates this and will throw you out for it. But strength in numbers and the hilarity make that 2-1 to the punters.

No sporting event would be the same without heckling being hurled at the players from the stands.

I was fortunate enough to sit next to a group of married middle-aged guys from both Australia and England who dished out a good amount of heckling. Some highlights you might like to use at a future Australia Vs England matches included:

“Big Bird’s [England’s Chris Tremlett] coming out to bat”
“He was out by a furlong”
“We all live in a shitty country, a shitty country…” – sung in tune to The Beatles Yellow Submarine

And two of my favourites:

A day out watching Australian cricket this summer would have filled you with confidence, for Australia successfully defending their world cup crown. And if you simply love cricket, or want a fun day out, you could do far worse than spending it at the SCG. For example, you could go to Coogee beach and park half of your car in a storm drain. 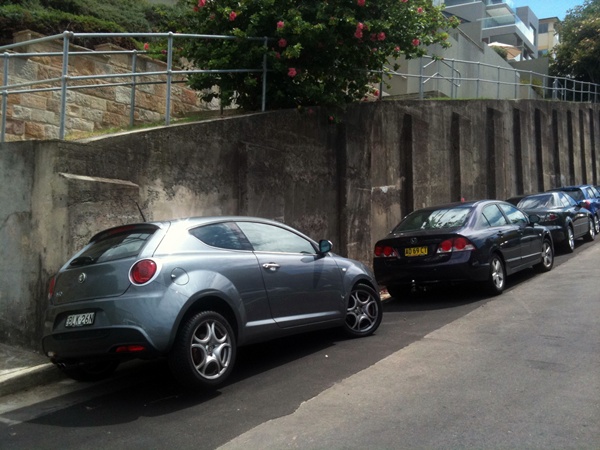 Big thanks go to Tony for this detailed post! You can read more of his work over on It’s Good Overseas.