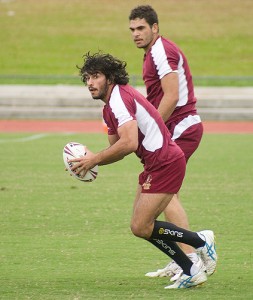 So far for 2010, the Maroons have already won the first two games in this 30th annual State of Origin series. Even though this means that the Origin victory is already theirs, the third and final match is always played. The real question now is whether or not they will make it a sweeping victory of three wins, which they haven’t actually done since 1995.

Game 3 plays in Sydney on July 7, 2010 at the ANZ Stadium with kickoff at 8pm. Tickets can be purchased through Ticketek if you are interested in going this coming Wednesday. Be sure to buy your ticket for the appropriate cheering section, or you just might feel a bit out of place!

The ANZ Stadium is located at Sydney’s Olympic Park, which is quite accessible via multiple modes of public transportation. The stadium’s website has a pretty thorough list of directions and information for getting there by bus, train, ferry and car. Visit site >>

The State of Origin is a big series of three games in the Rugby League involving the Blues and the Maroons, a rivalry dating back to the earliest of years. The goal for the event is to win the best of three matches, each of which are spread out across many weeks in the Australian winter. The best of the best players in New South Wales are put on the Blues team, while the great players from Queensland join the Maroons.

The State of Origin for the Rugby League started officially back in the 1980s, and the outcomes for each year’s events have generally been quite even up until recent years when Queensland has taken the upper hand. All State of Origins since 2006 have resulted in a Maroons victory (including this year).