The magic of Australia, for those of us who love the ocean, is that it is blessed with a seemingly endless wealth of uncrowded beaches, dive sites and surf breaks.  According to Geoscience Australia, Australia and her outlying islands posses 59,736km of coastline.  Match that with recent census numbers that chart the country’s total population at roughly 22 million people and you get 2.71 meters of coast per person.  That’s just about nine feet per inhabitant! Meaning that if every single Australian walked to the beach at once and spaced themselves evenly, they’d be able to set up a beach towel, esky and umbrella without intruding on anyone else.

Imagine what the same scenario would look like in the state of California which has 5,515kms of coastline compared to 36 million people. (SPOILER ALERT: It wouldn’t work)

Which is why even though I was very, very surprised to find myself surfing all alone this week (except for a few friends and dozens of dolphins) on a ten-kilometer long beach, I probably shouldn’t have been.  The dreams that many travelers harbor of camping out on remote stretches of sand to surf and fish nonstop become shockingly, wonderfully realistic once you leave Australia’s few big cities.

Yet another reminder that this giant, red-centered, ocean-ringed country is worth exploring with a fine-toothed comb. 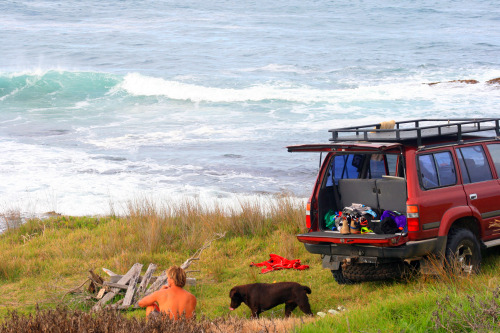