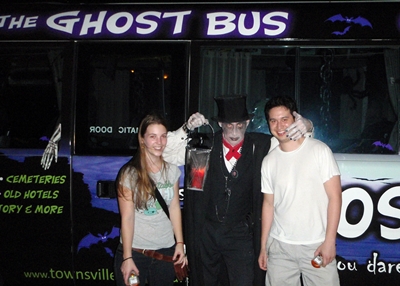 Halloween in America is one of my favorite times of the year; I love all the candy, costumes and scary movies on television. A brochure for Townsville Ghost Tours happened to catch my eye when I was there last week, so I felt that I had to sign up in order to get into the holiday spirit.

Townsville Ghost Tours offers several different types of tour options, but the one I went with was the 3 hour “Haunted Townsville”. Although I felt it was a bit pricey at $65 per person, I had to consider that this included entertainment for at least 3 hours of my evening (and coming from Sydney I know that 3 hours out could easily top that).

We were told to arrive by 7pm at the West End Cemetery, which seemed like the perfect place to kick off a ghost tour. But, wait, the tour guide was seriously dressed up like the pictures on the brochure, and he decided to pass out cups of blood (juice) in the process. As lame as it seemed, I tried to be open-minded and just let the atmosphere take over.

Then he passed out our EMF (electro-magnetic field) detectors so we could detect the energy of a ghost when it is present. Hey, that’s cool; what he forgot to mention, however, is that they are normally used to check for energy that is related to shoddy electronic devices and the like – nothing to do with a ghost at all. In fact, being bombarded with off-the-charts EMFs while upstairs in a hotel was doing nothing more than making me feel light-headed. 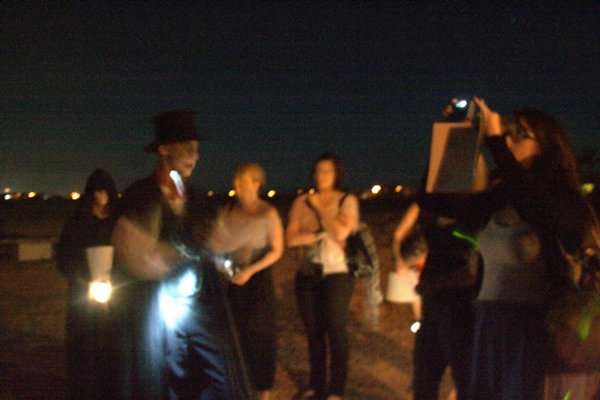 You see, I’m a avid Ghost Hunters watcher, so I like to think I know a thing or two about finding — or not finding — ghosts. And, what this guy was saying in regards to seeing orbs in photos and ghost energy was not adding up. Furthermore, the “haunted wheelchair” you can sit on while in the bus is really nothing more than a chair from a nursing home that four people had actually passed away in.

So, would I say the ghost tour was creepy? No. Disturbing? YES! 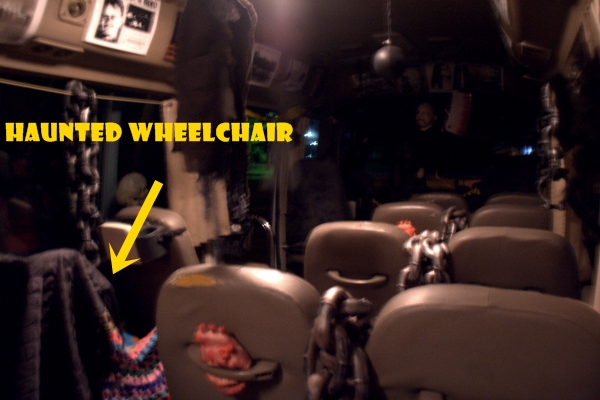 What I learned on this 3 hour tour to some of Townsville’s most historical spots is that the past of this town is dodgy and tragic to say the least. Murders, suicides, sunken ships and other mishaps are all covered in this night out, so if anything it just gives you a glimpse into a history that is full of gruesome events. In that case, I would suggest taking advantage of the daytime Crime Tour instead (offered by the same company); he was quite good at providing thorough stories of everything on the excursion, especially the murder mysteries. Unless you are easily spooked, the Ghost Tour might be a little on the disappointing side — as it was for me.