Top 10 Things to See and Do Along the Nullarbor

This guest post is brought to you by Rachael Taft from Girl, Unmapped, a girl who has been living in Australia for the past year. She’s put together this amazing piece on what exactly there is to do and see if you’re driving out across the Nullarbor, one of the most unique experiences you can have in Australia. Enjoy!

Many people don’t realize that the Nullarbor is actually just one part of a much larger drive. Whichever way you come, your Nullarbor journey will start long before the Nullarbor Plain, on the Eyre Highway at Ceduna (coming from the east) or Norseman (coming from the west). The actual Nullarbor is just one huge stretch of land in the middle of the Eyre Highway. So while “Nullarbor” is derived from the Latin for “no trees” you may be surprised (and probably happy) to discover there are still plenty of trees along most of this long drive. Even the Nullarbor itself is not as barren as you might expect, with plenty of scrub and plant life (especially if there’s been rain).

About 1200km lie between Ceduna and Norseman, with the entire Eyre Highway stretching for a total of 2700km. And while there are certainly interesting things to see and do on such a long cross-continental drive, it wasn’t too hard to narrow them down to a top 10 list. But don’t be discouraged by that. Remember: It’s about the journey, man, the experience. The fun stuff to see along the way is just an added bonus. Here are the highlights (there are of course other things to see and do along the way!), in order from east to west.

Even if you’re not into golf, the new Nullarbor Links golf course is worth checking out. The 18 holes span 1365km, spread out across the Eyre Highway with a hole at pretty much every town and roadhouse between Ceduna and Kalgoorlie. One of the easiest ones to access is at Border Village — you don’t have to play to say you’ve been to the world’s longest golf course! 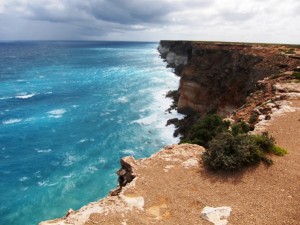 Further down the road, there’s a turn off for a viewpoint of the Bunda Cliffs. Still part of the Great Australian Bight (the second largest marine park in the world after the Great Barrier Reef), here you can see some fantastic views of the cliffs — just try not to get blown off! The intense wind will definitely wake you up if you were getting drowsy from your driving, and the landscape really is a sight to behold.

Whale watching at Head of Bight

Between June and September/October you can spot huge numbers of southern right whales in the sea off the Head of Bight, where they breed. As it is indigenous-owned land, it costs $12 to enter, but how often do you get to see so many whales without getting seasick? 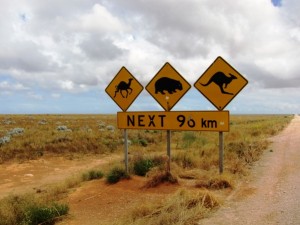 In general I think Australia has some pretty exciting roadsigns for the average foreigner. No matter how many kangaroo crossing signs you see, do they ever really get boring? The Nullarbor has an especially famous wildlife crossing sign featuring the triple threat: camel, wombat and kangaroo. It’s a rite of passage to stop and pose with this sign (hope you have a tripod to steady your camera on the hood of your car!). The first one is right after Yalata, but if you miss it there are more along the way. You’ll spot plenty of other cool/strange/funny and otherwise interesting road signs on the way — don’t be afraid to stop for photos, they will add to your memories of the journey!

Border Village, near the border between South Australia and Western Australia, has a few interesting things to see. First, there’s the Rooey II statue, a giant kangaroo whose pouch you can climb into for another fun photo-op. Right behind Rooey is Hole 12 of the golf course, if you’d like to check it out. There’s also one of the requisite “distances” signs, letting you know how far you are from everywhere else in the world. (Hint: Extremely far!) Once you cross the border (after having your vehicle checked for quarantine), there is a big statue/monument of big WA/SA letters, with some useful information on wildlife, attractions, etc. underneath. This is also where time changes to a weird 45 minutes (or 1 hour and 45 minutes, if its Daylight Saving Time) behind South Australia’s Central Standard Time. 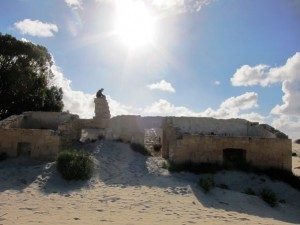 Not far from the border is Eucla, a nice place for a break. In Eucla you can visit the old Eucla telegraph station. Certainly not in use anymore — it is becoming gradually buried in sand. It’s fun to climb around in what’s left of the old building, but the surrounding sand dunes and coast is simply gorgeous and well worth exploring on its own.

If you have a 4WD you can visit the Eyre Bird Observatory and do some serious birdwatching. You can even spend the night in the old telegraph station. If that’s not your thing, nearby Cocklebiddy is still worth a quick look. According to the roadhouse sign, Cocklebiddy is home to 8 people, 25 budgies, 7 quails, 1 dog and 1,234,567 kangaroos. And obviously a sense of humor! 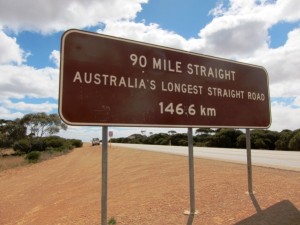 At 145km or so, this is a pretty long straight road. And then it just kind of bends for a second and there’s more straight road. Really, the Nullarbor in general isn’t very curvy. The most fun part of the 90 Mile Straight is taking a picture with the sign at the beginning and then saying you’ve done it. Though I didn’t find it particularly monotonous, and I felt it went by faster than expected. (Oh, and you are also now entering into the Western Standard Time zone.) If you want to put the big straight drive off a little longer, take a side trip to the Caiguna Blowhole.

This isn’t necessarily a must-do, especially if you’re hitting here near the beginning or middle of the day and want to just keep going all the way to Norseman, but Fraser Range Station is a great place to stay for the night and offers a nice change in scenery from the Nullarbor. Located in the world’s largest eucalyptus hardwood forest, Fraser Range is a really pretty, scenic place to hang out. There are some walks you can do around the area and a daily tour (it is a functioning sheep station). There are a variety of birds to be spotted (and they’re not too shy), kangaroos and wallabies hopping around in the evening, and you might even see camels or emus! Plus there is usually a very friendly group around the campfire in the evening. 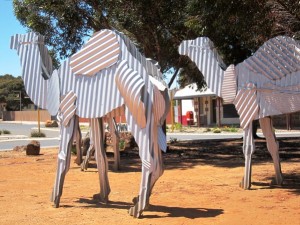 Truthfully, these are not a life-changing highlight of the Nullarbor. But Norseman does represent the end (or beginning) of a great journey, and the town’s tourism people seem to be really obsessed with these tin camel status. You’re going to be in Norseman already, you might as well check them out! They’re in a rather less-trafficked (OK, Norseman is pretty small and far from busy) roundabout, so we just drove round and round them until we really got our camel fill. Woohoo!

There are two really cool detours just off the Nullarbor that you should consider checking out if you aren’t in a hurry to Adelaide/Perth or wherever your final destination may be.

On the eastern end, beyond Ceduna, you can take the scenic route along the Eyre Peninsula. Although longer, this is a much prettier and more scenic route than going straight across on the inland route from Port Augusta. And at the tip of the Eyre Peninsula is Port Lincoln, where you can go cage diving with sharks! Or if that’s a little too intense for you, there are also opportunities to swim with tuna and sea lions. 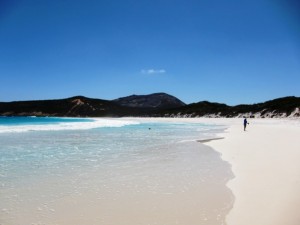 On the western side, and a bit more of a detour (you should be used to long drives by now!), is Esperance, which is well worth the time it takes to get there. In Esperance, neighboring Cape Le Grand National Park, and (if you have the time and tires for it) the other four national parks in the area, you will find paradise. Here you will find the blinding white sand beaches and sparkling turquoise waters of your dreams. In Esperance do the Great Ocean Drive (not to be confused with the Great Ocean Road) and get your first taste of what this area has to offer. Then spend at least a day in Cape Le Grand National Park where you can climb Frenchman’s Peak to get an incredible view of the whole area, and you might even spot some kangaroos on the beach at lovely Lucky Bay. (You should camp at Lucky Bay for the best chance of seeing the ‘roos at dawn or dusk.)

Be sure to read more about Western Australia by visiting Rachael’s blog, Girl, Unmapped.

All photos are courtesy of Rachael; please do not use without permission.