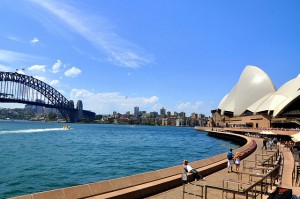 Australia is a land of opportunity for its traveling guests, with its diverse landscapes and exciting attractions, it can give thousands of experiences and memories for those with the time to enjoy them all. Catering to all tastes, Australian holiday goers can enjoy sun and sand in the Whitsundays, snowboarding at Thredbo or indulge in a tour of some of South Australia’s famous wineries. With so many places to go and things to see, we thought it was fitting to give an Australian perspective on the things you must see and more importantly, what you must try when you get to Australia. Here’s our top 10 Aussie icons you must see or try:

Australia Zoo on the Sunshine Coast in Queensland is without a doubt one of Australia’s most recognizable attractions. Made famous by the late Steve Irwin, the zoo is home to some of Australia’s deadliest predators including snakes, crocodiles, spiders and more. It’s a place to see, learn about and experience Australian wildlife at its best.

Vegemite is something you must try if you’re visiting Australia. It appears to be an acquired Australian taste, as most visitors can’t stand it. Try it for yourself on a sandwich or some toasted bread and see what you think!

Listed as a world heritage site, Uluru, also referred to as Ayers Rock, is one of the most iconic landmarks in Australia. Surrounded by caves, waterholes and ancient aboriginal paintings it is a must see for those interested in historic culture. The circumference of the rock is 9.4km and standing 348m in height it must be seen to be truly appreciated.

Another world heritage listed Australian destination, the Great Barrier Reef is a tropical paradise. With over 3,000 natural reef systems and hundreds of tropical islands, it is certainly a must-see on your trip to Australia. Take a glass bottom boat out on the reef, go snorkeling or scuba diving, or one of the many other activities that you can partake in over the reef.

A native Australian wind instrument developed by the indigenous population over 1500 years ago, a didgeridoo is another Aussie icon that you must get your hands on. You can find the wooden instrument relatively cheap at markets right throughout the country. Pick yourself up a didgeridoo and give it a go. Before heading back to your hotel to give it a try, make sure you ask the seller for some tips on how to play!

If it’s big enough for Oprah to hold her Australian show there, then it’s obviously another iconic landmark. Situated nearby to Sydney city, the Opera House is another one of Australia’s world heritage listed locations. Recognized as a modern masterpiece, the building’s roof comprises of interlocking ‘shells’ that give it a distinct look like no other.

Australians have developed a fascination with ‘big’ landmarks. Right throughout the country you will see some extravagant structures including the ‘Big Pineapple’ in Gympie QLD, the ‘Big Prawn’ in Ballina NSW, the ‘Big Merino’ in Goulburn NSW and the ‘Big Apple’ in Stanthorpe QLD.

Rugby league is played in a number of countries throughout the world, but nowhere is it as passionate as in Australia, particularly when it comes State of Origin time. The rivalry between QLD and NSW has seen years of heated clashes and amped up crowds that gets bigger every year. Grab yourself some tickets to a game if you’re lucky enough to get your hands on some and experience Australian crowds at their loudest.

The Australian Football League (often called “Aussie Rules“) is another sport that Australians love, particularly in the Southern states. Grab some cheap Melbourne flights and get to a game at the MCG or other Victorian sports grounds. You will see dedicated fans that rival even the passion of the State of Origin crowd. Another Australian sport that’s a must on your holiday itinerary.

10. Have a drink in an Australian pub

Australians love a drink and there’s nothing quite like the stories told around a good old fashioned Aussie pub. Grab yourself a local beer such as a XXXX or VB and sit by the bar to tell tales with the locals. You won’t be the same ever again!