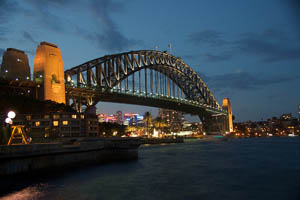 Do you think March is the ideal time to visit Sydney? Actually, there is no best season or time that is applicable to everyone. Everything depends on what you wish to experience and see and how you want them to spend.

With a moderate climate and remarkable scenery, the city of Sydney has a lot to give in terms of outdoor events and activities. But tourists are evenly attracted by the history and culture that the urban center of the city has. Indeed, tourists do not have to select between a scenic or cultural variation. Sydney features everything for such and even more.

Dinosaurs – Sydney has a new 650-sq. m. exhibition which discovers how dinosaurs have lived and died and how people know them. The exhibition uses modern science and advanced technology telling about the 230 million years old narrative for the young generations of dinosaur aficionados. It has four major thematic parts: Dinosaur World, Surviving Dinosaurs, Dinosaur Life and Discovering Dinosaurs. You can see life size dinosaur models that include the China’s feathered dinosaurs and different kinds of herbivore and carnivore dinosaur skeletons and skulls from T-Rex to the strange Cryolophosaurus and scary Chasmosaurus with enormous frills and horns. The exhibit is open daily from 9:30 in the morning until 5:00 in the afternoon at the Australian Museum.

Lifestart Kayak for Kids – This is a 17 and a half kilometer fund raising event and awareness for the Lifestart, a charity that helps children with disabilities. Divided into four legs with 4 to 5 kilometer each, the event could be accomplished by unaccompanied paddlers on their individual expertise or by group relay team that is consists of 12 to 13 individuals sit-on-tops kayaks. Named the City2Surf on water, the event is flexible and takes paddlers all through the scenic Sydney Harbor attractions via isolated beaches. This event will take place on March 28, 2010 at 9:00am to 2:00 pm.

Mardi Gras Festival – The Sydney Mardi Gras Festival 2010 is expected to become another marvelous festival with range of artistic performances along with means to spend the hours. The festival guarantees to be top rated, well diversified and high camp with activities across the city for travelers like you to witness or partake in. The event will start from February 13 to March 6, 2010.

March is autumn in the city. It enjoys agreeable temperatures. This month is merely a bit cooler compare to the peak summer seasons. Though morning temperatures can be very pleasing, evenings do begin to become a bit cool. Autumn is generally the wettest season in Sydney.

>>read more about weather in Australia

Flights to Sydney are easily accessible and are abundant. Just about each other top airline of the world also provides an airfare for discount to the city of Sydney. The city has one international airport called Sydney Airport. You may want to think about traveling on a lesser-popular discount carrier so as to obtain cheap airline ticket to this city and be able to save on the last minute low-priced airfares.

The accommodation options in Sydney have greatly expanded in the recent years and you could now choose between a lush 5-star property, classy boutique hotels, amiable beachside lodgings and a lot of Sydney hostels. The prices for accommodations depend on the location of the hotel. The costly ones are located in the business district and most incorporate complimentary breakfast and taxes.